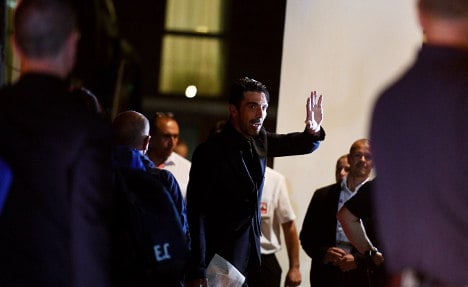 Italy, who lost the 2012 final 4-0 to Spain, have failed to get past the first round of the past two editions of the World Cup and face a tough battle to qualify from Group E.

Labelled the 'Group of Death', it includes Belgium, ranked number two in the world, Sweden and the Republic of Ireland.

But the task did not appear to faze local fans of the 'Azzurri', around 150 of whom – many with Italian origins – gathered outside the Marriott Courtyard hotel in the centre of Montpellier, where the team bus arrived shortly after 2230 local time (2030 GMT).

Fans dressed in Italy t-shirts, Italy football shirts and various clubs from around the country's Serie A league waited patiently with cameras and flags in hand hoping for a glimpse of their heroes.

Shouts of 'Italia, Italia !' went up as the team bus arrived and, after a quick rendition of the Italian national anthem fans began to call for the squad's veteran goalkeeper Gianluigi Buffon by shouting 'Gigi, Gigi!'.

Minutes later, Buffon responded to calls for players to come outside the hotel by making a brief appearance to wave at supporters.

For the De Pietro family from Napoli, who like thousands of other Italians now live in Montpellier for work reasons, it is set to be an “emotional” few weeks.

“When we found out Italy were going to be based here, we got very emotional,” Laura De Pietro told AFP. “We couldn't believe it when it was announced.”

Her partner Andrea, a web developer, admits Italy's task of repeating their 2012 feat of reaching the final looks difficult.

“He's not had a lot of chances in the Italy team, but he's been among the best in Serie A this season,” added Andrea.

Italy begin their Group E campaign against Belgium in Lyon on Monday.