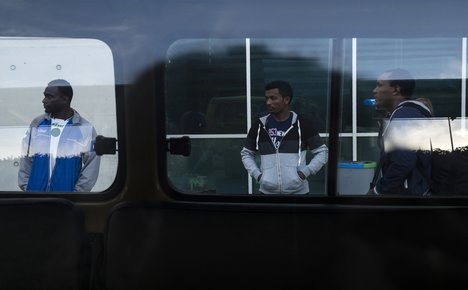 The number of people applying for asylum in the EU for the first time fell to 287,1000 during the first three months of 2016. Photo: Iakovos Hatzistavrou / AFP

Overall, the number of people applying for asylum in the EU for the first time fell to 287,1000 during the first three months of this year, down 33 percent on the 426,000 who applied in the same period of 2015, Eurostat said.

In contrast, the lowest rates were observed in Slovakia (three applicants per million inhabitants), Estonia (4), Romania (11), Lithuania (13), Portugal (14) and Latvia (16).

More than a third of first-time applicants came from Syria (36 percent), with more than 85 percent of the 102,400 Syrians who applied during the first quarter registering in Germany.

Iraq and Afghanistan were the second and third main countries of origin.

For Italy, the three main countries of origin among those who registered for asylum during the period were Pakistan (4,125), Nigeria (3,535) and Gambia (1,940).

During the first quarter of 2016, there were in total 565 first-time asylum applicants per million inhabitants in the EU as a whole, Eurostat said.

So far this year more than 48,000 people have been brought to the Italian coast after being pulled from boats trying to cross from Libya, according to the UN refugee agency.