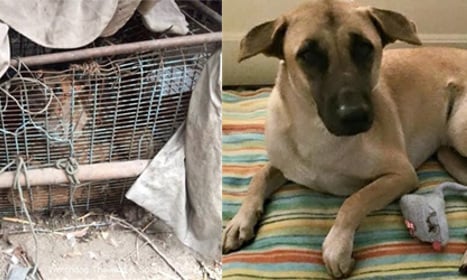 Boonrod when he was found, and in his new home. Photo: Soi Dog Foundation

He was rescued from a clandestine butchers' located in a basement in Thailand, when Thai police and workers from the Soi Dog Foundation conducted a raid. Unfortunately, he was the only dog found alive there; 19 others had been hanged and skinned alive, and Boonrod was terrified.

Now, he lives with Venetian author and animal rights activist Paola Tonussi, and two other dogs, in Italy. And what's more, he's the star of a new book, called Boonrod, in which Tonussi describes the pooch's ordeal from his point of view, and which was distributed with local newspaper L'Arena to raise awareness of the dog meat trade.


Paola and Boonrod in an advert for their new book. Photo: Soi Dog Foundation

“This phenomenon isn't as distant as it seems,” Tonussi told Brescia Oggi, adding that in January a Chinese restaurant in Florence was shut down following its alleged use of dog meat.

While Boonrod may be living la dolce vita now, recovering from his trauma was not an easy experience. Many of the dogs rescued by Phuket-based Soi Dog Foundation suffer permanent psychological damage and are never able to live with humans.

Boonrod recovered thanks to months of treatment by volunteers, while Tonussi waited to find out if her request to adopt him would be successful. Finally, when the volunteers felt he was ready, Boonrod boarded a plane to Italy in October last year.

All proceeds from the book will be donated to the Soi Dog Foundation, and Tonussi hopes to raise awareness in dog-loving Italy of the problem.

The annual dog meat festival is currently taking place in Yulin, China. During the festival thousands of dogs and cats are butchered, often being skinned or boiled alive before customers' eyes due to a belief that the pain makes the meat more tender.

Dogs are stolen from homes or strays are snatched in the streets – South Korea is the only country to have official farms for dogs.

In Thailand, killing dogs for meat or skin has been illegal since December 2014, a law passed largely in order to protect humans from rabies. But illegal smuggling and butchers' like the one Boonrod was saved from are still common.

According to the foundation's figures, 500,000 dogs are killed for meat each year in Thailand, as well as 20 million in China and between five and seven million in Vietnam.

“When I saw his eyes I knew that I wanted him with me,” Tonussi told L'Arena. “I'm happy to have given him an opportunity; the love and serenity that he offers me every day are priceless.”

“The book is the story of a great love. An escaped fate. A rebirth.”