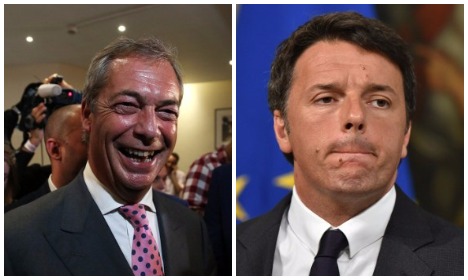 Britain's 52-48 percent vote to leave the EU is the biggest blow the institution has sustained in its 70-year history, but where does it leave Italy? And how will it shape the country's future in the EU?

Is the stage set for an 'Italexit'?

“Contrary to popular belief, it has strengthened Italy's bond with the union,” Franco Pavoncello, a political science professor and president of Rome’s John Cabot University, told The Local.

Although polls earlier this year showed euroscepticism was on the rise across the country, Italy's second most popular party, the Five Star Movement (M5S), publicly backed the country's membership of the EU for the first time on Thursday, bringing an end to years of anti-European rhetoric.

In a post on his blog, the party's founder, comedian Beppe Grillo, stated his belief that Italy needed to “change the EU from within”.

“Italy has no intention of leaving the EU,” he wrote in the wake of the Brexit vote.

“We are one of the founding members of the union and [our party] would never have stood for European elections if we didn't believe in it.”

Grillo wrote that Brexit represented a “failure for the EU” but that his Five Star Movement would seek to create a European “community” instead of a “group of banks and lobbies”.

“M5S's pro-European stance is highly significant, and means that at the moment the political climate in Italy would not support a referendum on EU membership,” Luca Marino, professor of European economics at Rome's Sapienza University, told The Local.

While it may have strengthened Italians' resolve to stay in the EU, a Brexit creates a political headache for Italy, which has lost its strongest political ally within the bloc.

“An Italy-Britain axis has in the past worked to counterbalance Franco-German dominance of the political agenda,” Pavoncello explained.

“Britain's loss can only strengthen German hegemony within the EU.”

The UK government now needs to thrash out the exact terms of its departure from the 28-country bloc, but experts say Italy will not be able to dictate those terms.

“The precise details of Brexit will be negotiated by the EU as a whole,” Marini said.

“While Italy will have a say in what those eventual terms are, it won't be able to make any specific demands of the UK.”

The segment of Italian society hardest hit by Brexit will undoubtedly be young Italians, who head to the UK in their thousands each year to work and study.

Italy's low wages and sluggish job market often sees graduates' skills wasted on menial jobs, but for years these skills have been put to good use in UK companies.

As Brexit was confirmed on Friday, global markets responded by spiraling into chaos, with the pound hitting a 31-year low.

Although the immediate effects were stark and predictable, what Italy can expect in the long-term is largely unknown.

“Italy's economy won't be affected any more or less that any other EU member state countries and it's hard to say what will happen,” Pavoncello explained.

“Italy exports a lot of food and high-grade electronic parts to the UK, so if any areas of the economy are to suffer in particular, it will probably be these,” he added, reaffirming fears issued by Italian wine makers earlier this week.

But not everyone was convinced the referendum would bring doom and gloom to the Italian economy.

“I think the possible economic effects of Brexit have been over-stated to the point where hysteria has set in,” Marino said

“I expect the long-term effects to the Italian economy will be negligible, but either way, we're soon going to find out.”