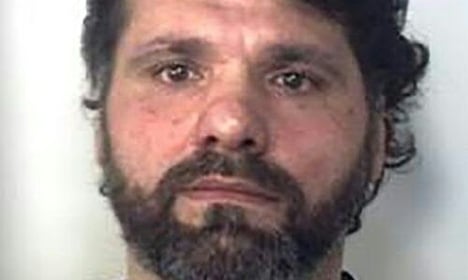 Fazzalari was convicted in absentia in 1999 of mafia association, kidnapping, illegal possession of weapons and a double homicide. Photo: Italian police

Ernesto Fazzalari, 46, a fugitive for 20 years, was captured in the early hours of the morning in an apartment in a remote part of the southern region of Calabria, home to the notorious 'Ndrangheta network of criminal clans.

Fazzalari was a leading figure in 'Ndrangheta, now considered the most powerful of Italy's crime syndicates.

He was the second most-wanted mafia fugitive after “superboss” Matteo Messina Denaro, a suspected leader of the Sicilian mafia, Cosa Nostra.

On the run since 1996, Fazzalari was convicted in absentia in 1999 of mafia association, kidnapping, illegal possession of weapons and a double homicide linked to a bloody 1989-91 feud which left 32 people dead in his home town of Taurianova.

“Taurianova is a place where the clans control every clod of earth,” he said.

“He felt safe. That is why he was found with only his girlfriend and no bodyguard. He thought he was protected on his own turf, that he would be warned if he was in danger.

“But no alarm came. The investigation proceeded without him hearing a whisper. In the past people were afraid to talk but now I think the situation has changed.

“We have accountants and business people prepared to give evidence because they know there are judges and police who are on their side.”

Interior Minister Angelino Alfano said: “This shows that you cannot run from justice. These are the kind of victories that encourage and support us in the difficult but winnable fight against organised crime.”

Notoriously ruthless, the 'Ndrangheta has surpassed the notorious Cosa Nostra and the Naples-based Camorra thanks to the wealth it has amassed as the principal importer and wholesaler of cocaine produced in Latin America and smuggled into Europe via north Africa and southern Italy.

That trade is worth billions and previous police operations have indicated that the 'Ndrangheta has well-established links with Colombian producer cartels, Mexican crime gangs and mafia families in New York and other parts of North America.

The organisation is made up of numerous village and family-based clans based in Calabria, the rural, mountainous and under-developed “toe” of Italy's boot.

The name 'Ndrangheta comes from the Greek for courage or loyalty and the organisation's secretive culture and brutal enforcement of codes of silence have made it very difficult to penetrate.

A series of arrests in late 2014 and early 2015 confirmed that the organisation had expanded its Italian operations outside Calabria by buying up dozens of legitimate businesses across the wealthier north of the country, largely to launder cocaine profits.

The arrests also provided an unprecedented glimpse into the group's shadowy culture with police secretly filming a quasi-religious initiation ceremony in which new “wise brothers” swear an “oath of poison” in which they vow to kill themselves rather than betray a fellow clan member.

There are dozens of 'Ndrangheta figures still at large despite regular arrests in Italy and around the world — but prosecutor Cafiero de Raho said the most important fugitives had all been caught.

One alleged don, Rocco Zito, 87, was shot dead in Canada in January, Switzerland arrested 15 convicted 'Ndrangheta fugitives in March and last month the owner of a popular pizzeria in the Dutch seaside town of Scheveningen was unmasked as convicted Calabrian drugs smuggler Rocco Gasperini, 73.

Two mobsters who stayed in their homeland were arrested in January “living like animals” in a Calabrian mountain bunker with a cache of sub-machine guns, rifles and pistols.

Giuseppe Ferraro and Giuseppe Crea were hiding from gangster enemies as well as the authorities.

In 2013 one of their associates, Francesco Raccosta, was killed by being fed alive to hungry pigs in revenge for his assassination of a rival boss.