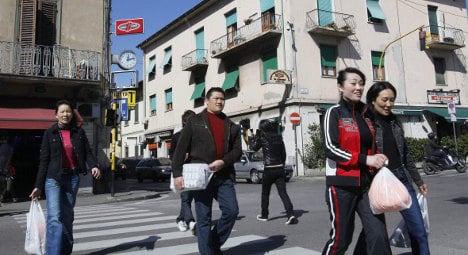 Prato is home to one of the biggest Chinese communities in Europe. Photo: AFP

The raids were carried out in the Tuscan town of Prato, home to one of the biggest Chinese communities in Europe and a booming textiles industry that is notorious for sweatshop exploitation.

The individuals being investigated are all linked to a Chinese cultural association “The City of the White Stag” and are also suspected of preying on law-abiding Chinese businesses.

Friday's raids were carried out under warrants issued for criminal association and commissioning racially motivated violence.

A police statement said the head of the White Stag group had organised vigilante style patrols in Prato as part of a protection racket which had led to attacks on Arab immigrants with no criminal connections.

The raids followed clashes between police and some 300 Chinese on Wednesday evening after a health-and-safety inspection of a Chinese-owned textile factory in Sesto Fiorentino, a suburb of Florence that is close to Prato.

The mini-riot was sparked after an altercation between officers and an elderly Chinese man who was stopped leaving the factory with a baby in his arms, according to local reports.

Four policemen and three workers were injured in the scuffles and police made two arrests.

Reports said protestors had shouted: “All you know how to do is to hand out fines.”

The clashes were raised at Friday's Foreign Ministry press briefing in Beijing.

Spokesman Hong Lei said Chinese diplomats had made representations to the Italian authorities, “asking them to enforce the law, carry out just investigations, and safeguard the security and legitimate rights and interests of Chinese citizens in Italy.”

Hong said China would “continue to follow this incident and offer necessary assistance to Chinese citizens there within our remit.

“Meanwhile, we ask Chinese citizens in Italy to safeguard their own rights and interests in a reasonable way.”

The latest incidents underline long-standing tensions between the Italian authorities and the country's Chinese community, which has prospered economically but is regularly accused of showing no interest in integration and of sending millions in untaxed profits back to China.

In the Florence area, authorities have long battled the related problems of sweatshop exploitation and clandestine immigration.

But local officials say efforts to better regulate the textiles sector have born fruit since a 2013 fire in a garment factory left seven people dead.

It emerged afterwards that the workers had been living in the factory and were unable to escape because the windows were barred.

There are more than 270,000 Chinese living in Italy, of whom over a fifth own their own businesses, and the community contributes some €6 billion to the Italian economy, according to the Leone Moressa foundation.

Prato is officially home to some 16,000 Chinese nationals out of a total population of 191,000. But local sources say the real figure could be closer to 50,000.

Liu Xiaodong, the acclaimed Chinese contemporary artist, spent time in the town earlier this year and included several paintings of its Chinese residents in his recent “Migrations” exhibition in Florence.

In an interview with AFP, Liu said his contact with the Prato Chinese had left him surprised by the slow pace of their adaptation to Italian life.

“They have been there mostly for at least a couple of generations and still they are very closed off,” the artist said.

“They have their own customs and traditions and are still very separate from the local population. This model of migration is also problematic.”