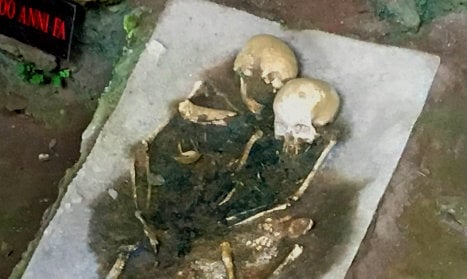 The skull belonged to boy of between 10 and 12 years old and was found in Calabria's Grotta del Romito, a cave used by homo sapiens between 23,000 and 10,000 years ago.

It is precisely the young age of the skull which has allowed scientists to recreate an ancient brain.

“The boy was still growing and therefore the bones of his skull were quite soft,” explained Fabio Martini, a professor of ancient history at the University of Florence.

“The pressure of the growing brain on the bone left a sort of 'imprint' on the inside of the skull. Now, thanks to 3D scanners and computer technology, we have been able to create a reliable 3D model of an ancient brain, which is groundbreaking,” Martini added.

The extraordinary ability to reconstruct the brain gives anthropologists, paleontologists and neuroscientists the opportunity to directly compare the brain of a young hunter-gatherer with the brain of a modern child.

“It will allow us to look at the development of different areas of the organ, such as the language centre and see how they developed.”

In looking at areas of the brain responsible for things like social interaction, spatial coordination and language, scientists hope to shed new light on the lives our ancestors led.


An ancient graffito at Romito showing a bull. Photo:Huston/Wikimedia

The Paleolithic site at the Grotta del Romito, is one of the most important Paleolithic sites in Europe and has so far revealed a series of dwellings, graffiti and graves, which have proven central to the understanding of Italy's human history before the agricultural revolution.