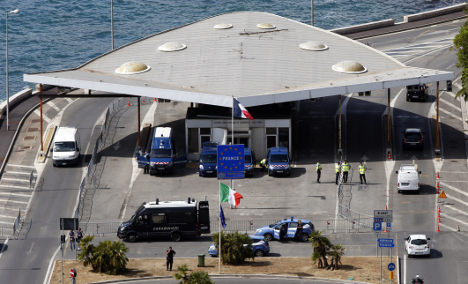 Border checks have been tightened at Ventimiglia. Photo: Valery Hache/AFP

Checks were immediately tightened at Ventimiglia after a truck smashed into a crowd celebrating Bastille Day in the southern French resort, killing at least 84 people.

“We have reports that fugitives could have headed to Italy,” a police officer was quoted by Ansa as saying.

“But for now, we have no concrete evidence.”

Initial reports suggested the driver may have had an accomplice who was seen running from the truck, but this has not been confirmed.

The suspect has been identified as a 31-year-old Franco-Tunisian with dual nationality, according to reports.

Read more: What do we know about the Nice terror attack suspect?

Defence Minister Roberta Pinotti said the concern over the risk of a terrorist attack on Italian soil “is high”.

Just yesterday, Alfano announced the country had 'intensified security”  due to a “resurgence of jihadist threats”.

He said the country’s security alert level remained at 2, the highest possible in the absence of a direct attack, while there will also be targeted checks at smaller airports, prisons, ports, railways and on buses.

Alfano told a meeting of the national security and public order committee that the country “must maintain a high level of alert and strengthen security measures across the entire national territory, especially at vulnerable targets”.

Italy increased its security level in the wake of the terrorist attacks in Paris on November 13th, in which 130 people were killed.

The minister has also signed deportation orders for 99 people suspected of being connected to terrorism since January 1st.