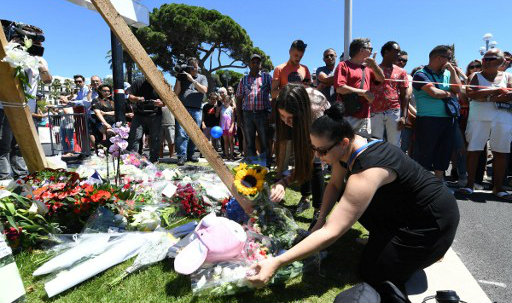 At least 84 people were killed in the attack in Nice on Thursday night. Photo: Boris Horvat/AFP

Medical workers in the city told the Italian news agency Adnkronos that there was “at least one Italian female” among the victims, but there has not yet been any official confirmation from the Italian Foreign Ministry.

Four Italian nationals are currently reported missing after a truck rammed into a crowd of people who had gathered to celebrate Bastille Day on Nice's Promenade des Anglais.

The driver has reportedly been identified as 31-year-old Mohamed Lahouaiej Bouhlel, a Franco-Tunisian of dual nationality. He drove the truck for two kilometres at speeds of up to 80kmph.

The missing Italians include a couple and two women.

Angelo D'Agostino, 71, and his wife Gianna Muset, 68, have not been heard from since 9.55pm on Thursday, just 35 minutes before the attack.

Andrea Avagnina, 53, and his partner Marinella Ravotti, 55, both from San Michele di Mondovì, Piedmont, were also reported missing but Avagnina was found at Nice's Pasteur hostpital on Friday afternoon and is reportedly in a critical condition.

The whereabouts of his wife are still unknown.

The pair was reportedly visiting Nice while holidaying in the south of France.

“We ask for anybody with news of the two to come forward as soon as possible and are working closely with the French and Italian authorities,” Domenico Michelotti, mayor of San Michele di Mondovì, told Ansa.

A young woman from Lombardy, Elena Gallamini, is also missing and an appeal has been launched via social media by her concerned sister, Cristina.

“Has anyone heard from Elena? Three days ago she was in Marseille and I'm not sure if she was in Nice tonight but her phone is off.”

There are currently some 30,000 Italian nationals living in Nice as well as thousands of others visiting the city.

Nice and its surroundings are popular holiday destinations for Italians from the northern regions of Piedmont and Liguria, who can reach the area by car in a few hours.

The new Five Star Movement mayor of Rome, Virginia Raggi, has announced Rome's city hall will be lit up with the red, white and blue of the French tricolour on Friday night in a show of solidarity with France.