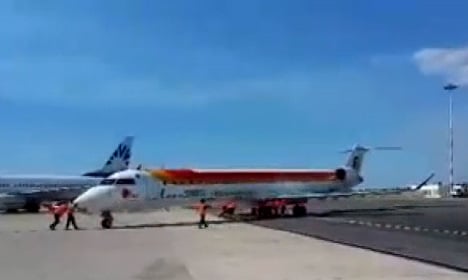 An Iberian Airlines, Bombardier CRJ900 had to be pushed onto the runway due to a technical fault. Photo: Screengrab/TheLocal

The incident involved a 90-seater Iberian Airlines, Bombardier CRJ900 series passenger jet bound for the port of Vigo in Spain.

The plane was scheduled to depart at 3.10pm but after a problem with one of the terminal's tug trucks –  which are used to push planes onto the runway – the fully-loaded jet was left stranded.

Although most commercial jets can, in theory, reverse out of the gate by themselves, the operation is considered too fuel-intensive so small tugs are needed to push planes out of the gate before they begin takeoff.

After more than hour on the ground, the pilot finally got the go-ahead from air traffic control to request a push from 11 members of airport staff, who rolled up their sleeves to help get the plane on its way.

It was no easy feat – fully loaded with passengers and luggage, a CRJ900 jet can weigh up to 36 tonnes.

The plane eventually took off at 4.30pm. A video of the strange event can be seen below.