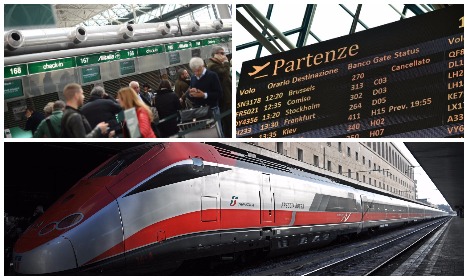 Trains and flights will be hit by a national strike in Italy this weekend. Photo: Gabriel Buoys/Tiziana Fabi/AFP

A string of strikes will hit Italy's airports and railways from Friday, creating misery for travellers across the country, Rai reported.

Railway workers at Italy's national rail service, Ferrovie dello Stato, represented by unions Cub, Cgb and Cat will down tools for a 24-hour period from 9pm on Saturday night.

The strike will affect all regions of the country apart from Veneto, Piedmont, Marche, Abruzzo and Umbria.

So far, 28 trains have been cancelled and a further four delayed or modified.

TrenItalia informed travellers that “high-speed intercity trains will be running normally over the weekend,” but has urged those planning to use the railways this weekend to check its site for the latest information.

In the northeastern region of Lombardy, railway workers will strike between 9am and 5pm on Friday but not on Saturday.

Regional services operated by Trenord, including trains to the Milan's Malpensa airport, will be affected.

“Services to Malpensa airport will be replaced by buses,” a note from Trenord explained, advising travellers that they can keep track of developments in real time via the Trenord app.

Those flying in and out of Italy on Saturday are likely to hit by a separate strikes involving workers from Italian air traffic controllers Enav.

The eight-hour action is expected to cause nationwide delays between 10am and 6pm.

People have been advised to check the latest departures and arrivals information online before heading to the airport.

Hardest hit will be Venice's Marco Polo airport, as baggage handlers announced they will also be striking between 10am and 6pm on Saturday.