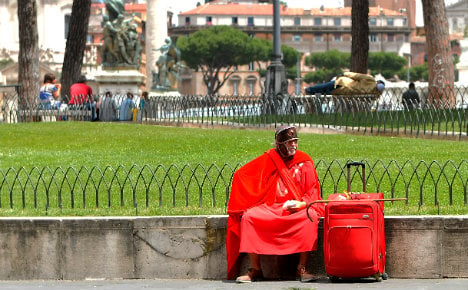 A gladiator-banning edict was passed by interim mayor, Francesco Paolo Tronca, in November, but expired in June, prompting scores of men to don ancient armour, tufted helmets and leather sandals in a bid to find their fortune on the streets of the Eternal City.

But Raggi, who is determined to clean-up Rome's image, wasted no time in banishing the illegal gladiators once more during her first council meeting on Tuesday.

At the meeting, the city's new Five Star Movement council introduced a new ordinance against the photo-souvenir workers, who authorities claim can make up to €2,000 a week.

In addition to the ban, the gladiators will be fined if they are caught peddling their wares.

“Rome is finally off and running!” Raggi posted on Facebook following the meeting.

“From tomorrow, a new ordinance will impose sanctions of up to €400 against the photo gladiators,” she wrote.

The new rules will also hit the operators of unlicensed rickshaw tours who line up in front of the Colosseum each day hoping they can – literally and figuratively – take tourists for a ride.

For many tourists, a photo with a gladiator (they call themselves gladiators, but most dress as Roman centurions) in front of the Colosseum or Pantheon may seem like a bit of harmless fun.

However, previous administrations have sought to stop them from operating following a string of complaints from unsuspecting tourists, who are frequently stung for anything up to €50 after being sweet-talked into a snap.

But they don't just have a reputation as rip-off merchants. In the past, gladiators have been snapped groping female tourists and last summer one group was even filmed robbing €100 from the wallet of a Romanian journalist after he posed for a photo.

But the gladiators say they have been unfairly victimized.

“I'm taking home between €40 and €50 a day” one centurion told La Repubblica. “I can only ask for a free offer, which means I take anything between one and five euros per photo.”

“Following the previous ban, I was forced to beg for money on the street because I had no other income,” the centurion added.

After being made redundant once more, other gladiators insisted they enrich the cultural sites of the capital.

“We're just part of the attraction and add to the atmosphere,” another explained.

“We also help with security around here. Near the Colosseum we stopped a robbery the other day and once helped take down a man who was wielding a knife.”