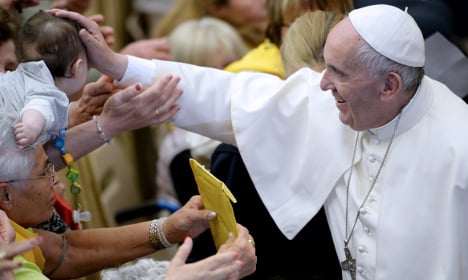 The 13-member commission, made up of seven men and six women, will study the question of female deacons and especially the history of women playing this role in the early years of the Church, the Vatican said in a statement.

The move follows a pledge made by Francis in May during a question-and-answer session with members of female religious orders.

Advocates of women serving as deacons have long argued that they are pitifully under-represented in the Church's hierarchy and decision-making processes.

Allowing women to enter the clergy at a rank just below a priest would represent a first step towards correcting this imbalance, they argue.

They also insist there is no theological obstacle to the move because of the precedent established by women performing the role in the early centuries of Christianity.

Francis said in May that he was unclear about the history and that it “would do good for the Church to clarify this point.”

He made it clear however that he did not see women becoming priests, an option that was categorically rejected by one of his predecessors, Pope John Paul II, following a 1994 study.

The Vatican did not set a date for the commission to begin work or a deadline for it to reach conclusions.