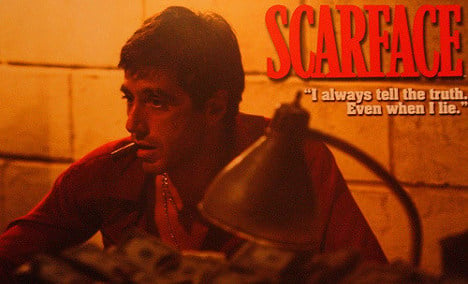 The mobster wanted to be like drug kingpin Tony Montana, the character played by Al Pacino in 'Scarface'. Photo: Animesh Bulusu

William Cerbo, 34, who was placed under house arrest in Sicily in 2014, is accused of being the head of a clan active in trafficking, extortion and loan sharking, as well as expert in money laundering.

Cerbo so wanted to be like drug kingpin Tony Montana, the character played by American star Al Pacino in Brian De Palma's 1983 film, that he was planning to remodel his villa on the one from the set, police said.

He told Italy's taxman he had earned €80,000 in 14 years, while the real figure was closer to two million, investigators said.

The assets confiscated, which include 20 companies, 30 properties and luxury watches, all traceable back to Cerbo, have an estimated value of €44 million.

After a war on the Mafia dating back decades, Italy now controls some 3,000 companies and over 12,000 properties seized from figures from its underworld, as well as more than two billion euros worth of bank deposits and personal goods.

The idea of hitting the organized crime group where it hurts – in the wallet – is considered one of the main weapons in the fight against arrested or jailed clan leaders, many of whom attempt to continue to run business as usual from behind bars.

The Sicilian Mafia, known as “Cosa Nostra” or “Our Thing”, was Italy's most powerful organised crime syndicate in the 1980s and 1990s, but has seen its power diminish following years of probes and mass arrests.