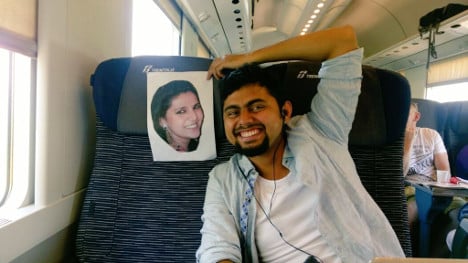 Faizan Patel poses with an image of his wife on a train in Italy.

Having only taken a short break after their wedding, Faizan Patel and his wife Sana, from New Delhi, had looked forward to their dream honeymoon in Italy.

But just two days before they were due to leave, they discovered that Sana had lost her passport.

Seems like I am travelling alone tonight via @TurkishAirlines. My wife has her passport misplaced. Fingers crossed that we find it soon.

They failed in their attempt to get a travel document in time, and so Faizan, a lifestyle and product photographer, decided to go on the trip alone, leaving his wife to grapple with Indian passport authorities.

#Yay #PartyTime he declared on Twitter as the pair posed for selfies before his 'tearful' departure from India.

But he didn’t abandon her completely – he took with him a cardboard cut-out of her face, which accompanied him on long train journeys between Italy’s fine cities, all the while taking ‘selfies’ with it and chronicling the trip on Twitter.

In one of his posts he tagged India’s Foreign Minister, Susham Swaraj, who then pledged to swiftly issue his wife a duplicate passport so that she could join him for the rest of the two-week honeymoon.

Ask your wife to contact me. I will ensure that she is with you on the next seat. pic.twitter.com/sktnOMkg0a @faizanpatel

The passport was soon issued but the couple’s next hurdle was getting an appointment at the visa processing centre.

Speaking from Pisa, Faizan told The Local that Sana should get her visa on Thursday night and will be on the next available flight to Rome. She will then travel from the capital to join him in Florence.

Despite the absence of his wife, he said the trip to Italy so far has been “simply breathtaking”.

“It's a beautiful country. I'm loving the weather here.”