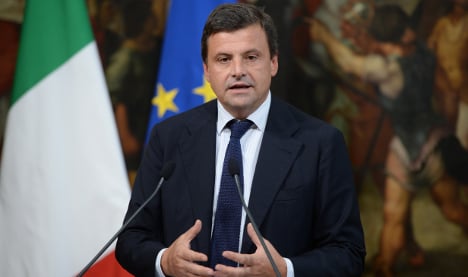 Economic Development Minister Carlo Calenda's comments came three months after Rome was granted “unprecedented” leeway over its 2016 budget and warned by the European Commission that it should be tightening fiscal policy next year.

Calenda spoke out after data published on Friday showed the Italian economy failed to grow between the first and second quarters of this year, suggesting a sluggish recovery which began last year has stalled.

Analysts say the government will now have to revise downwards its forecasts of growth of 1.2 percent for this year and 1.4 percent in 2017, with knock-on effects on its deficit reduction plans.

“The Treasury will present updated figures in September. I can't hide the fact that the room for manoeuvre is tight,” Calenda told Turin daily La Stampa.

“We are discussing with Europe how to address the absolute necessity of boosting public and private investment.”

Calenda implied that could mean allowing the 2017 budget deficit to run higher than previously planned, possibly up to the three percent of GDP ceiling enshrined in the eurozone's rules.

The Commission has set Italy a deficit target of 1.8 percent for 2017, arguing that kind of adjustment is necessary to reverse the upward trend in the country's huge debt, which hit a record of just under 2.25 trillion euros ($2.51 trillion) in June.

“We intend to respect the rules but we are also fighting to change them,” Calenda said. “The unbreachable limit is the debt, which cannot increase.

“We have already obtained a lot of flexibility, we intend to ask for more, the maximum possible, but always within the rules.”

Other Italian newspapers were unanimous Saturday in predicting that Prime Minister Matteo Renzi would defy Brussels by presenting an expansionary budget in mid-October.

The youthful premier's popularity has waned of late and he has staked his future on a constitutional reform referendum scheduled to take place in November.

Renzi has vowed to quit if he loses the vote on plans to streamline Italy's parliament and electoral system.