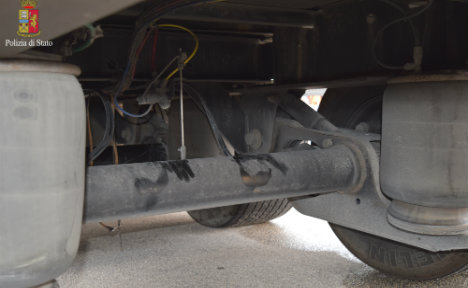 Police stopped the vehicle, which was heading north on Italy's A1 motorway, on Monday afternoon, after receiving a series of phone calls from terrified motorists who had spotted the desperate man while driving and feared he could fall at any minute.

Amid the heavy summertime traffic on the motorway, police managed to catch up with the truck just outside Frosinone, Lazio.

The lorry was stopped and the refugee freed from a makeshift harness he had fashioned under the vehicle using two belts.

It was unclear when exactly the man attached himself to the underside of the vehicle, but police believe he had travelled like that from the southeastern port of Brindisi, 400 kilometres from where the lorry was intercepted.

“By this point he was exhausted,” the police said in a statement. “He was then taken to a hospital in Frosinone.”


The youngster is thought to be in his early 20s. Photo: Polizia di Stato.

Despite the ordeal, the refugee, who is thought to be in his early 20s, is in good health and has been released to a migrant reception centre. He has however, been ordered to leave Italy within seven days after indicating he did not want to register an asylum request in the country.

The Bulgarian lorry drivers, who were on a trip from Turkey to Spain, said they had been unaware of the stowaway and were allowed to continue their journey.

Migrants and refugees in Italy regularly undertake dangerous and ridiculous journeys in a bid to make it to northern European countries where they believe they will have a brighter future.

Last week, Italian police arrested a 37-year-old, a resident of Nice, in Breil-sur-Roya, a French mountain hamlet close to the Italy's border, after he was caught smuggling eight Eritreans, including three women and two children, into France in his Citroen van.

Earlier this summer, one migrant (and skilled contortionist) made headlines after he was filmed trying to sneak into Switzerland stuffed inside a tiny suitcase.