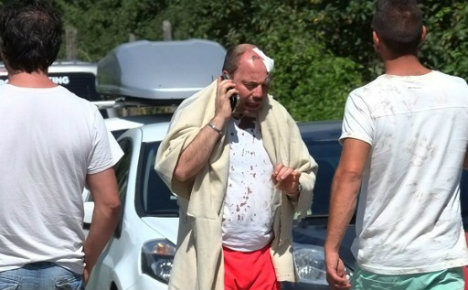 A victim of the quake in Illica desparately calls his relatives. Photo: Mario Laporta/AFP

The harrowed gesture speaks volumes about the anguish engulfing the 69-year-old.

“My sister and her husband are under the rubble, we're waiting for diggers but they can't get up here,” he explains to AFP.

“There's no sound from them, we only heard their cats. I wasn't here, but as soon as the quake happened I rushed here.

“They managed to pull my sister's children out, they're in hospital now.”

Bordo and his brother Domenico were among around 30 people sitting in a field on the outskirts of Illica. Their sister and her husband, who were on holiday from Rome, were among five people missing, presumed dead, in Illica alone.

Dozens more died in neighbouring villages and more than 2,000 people have been made temporarily homeless by a quake that struck without warning in the middle of the night.

Just after midday, nearly nine hours after the first quake shook residents and holiday makers from their sleep in terrifying fashion, army diggers were still making their way up to a village situated at an altitude of 800 metres (2,600 feet).

A helicopter buzzed overhead while an ambulance unloaded two stretchers near a collapsed house where around a dozen firemen hacked at the rubble with spades and pick axes.

All around were poignant signs of the destruction the quake wreaked: window shutters poking out from piles of rubble, flower baskets still clinging on to half-collapsed walls and brightly-coloured children's duvet covers catching the eye in houses that have become see-through.

In some of the deserted shells of what were once family homes, phones rang off the hook.

Two women sobbed and hugged each other as a collapsed house on the main square was searched.

Firemen guided two dogs over the piles of rubble in search of signs of life.

One of the sniffers suddenly stopped and went back to a particular spot.

That was where the digging would start but Daniela Romanato, a former firefighter helping out with the rescue operation, did not hold out much hope.

“The dogs are trained to search and then indicate trapped people,” she explained. “Just now one has indicated there is someone underneath the rubble here, but without barking, which unfortunately means the person trapped is most likely dead.

“We're sending a smaller dog in now to see if it can get closer to the person underneath, but it's very unlikely we're talking about survivors under here”.

The wind was whipping up the dust and, at the entrance to the tiny hamlet, children were dressed in the winter coats and flip flops they grabbed when the quake struck.

Some had since gone back inside for mattresses and pillows and laid them out in gardens. Civil protection workers distributed sandwiches and water.

Guido Bordo's brother, Domenico, looked on as the search progressed.

“We live quite far away but felt the quake, we rushed to get news from the television, and as soon as we saw it was here we called my sister again and again but she didn't answer,” he said.

“I feared the worst, and was right. I don't see how she can have survived under there.”