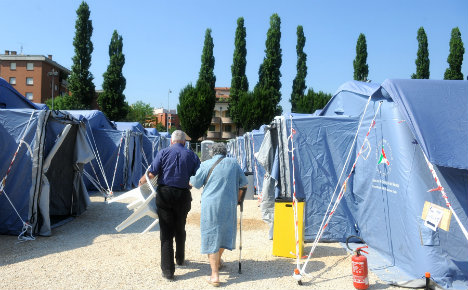 Some 2,700 people lost their homes in the quake. Photo: Olivier Morin/AFP

Some 2,700 people lost their homes in the 6.0-6.2 magnitude quake, the majority of whom are currently housed in 58 blue-tent camps which have been set up throughout the affected area.

But with the homeless victims facing the onset of a chilly alpine winter in the Apennines of northern Lazio and Marche, the Italian media are reporting the makeshift camps will be dismantled by the end of September.

According to Italian news agency, Ansa, the victims will be moved into local hotels for a three or four month period, while construction begins on sets of temporary wooden structures, which will be located as close as possible to their destroyed homes.

Although it is not currently known if Piano will be directly involved in designing the temporary towns, he is thought to be advising the Italian government on how best to rebuild the devastated towns of Amatrice and Accumoli.

Speaking to Corriere della Sera following his four-hour meeting with Renzi, the award-winning architecht, whose designs include London's 95-storey skyscraper The Shard, said he hoped affected communities would be able to stay together while their towns were rebuilt.

“You can't erase the soul of a place,” he said.

“Whoever has suffered a trauma like this needs to be able to carry on living where they always have done. Uprooting people is cruel and adds suffering to suffering.”

Piano emphasized that temporary wooden homes can be built for as little as €600 per square metre and can easily be recycled once their inhabitants move back into permanent accommodation.

On Monday, Renzi also stated his desire to overhaul vast swathes of Italy's ancient architecture as part of a plan dubbed 'Casa Italia', which seeks to make the country more resistant to tremors.

Some 24 million of Italy's 59 million inhabitants are thought to live in areas at risk from earthquakes.

Following the last week's quake, questions have been raised over the ease with which many recently restored or constructed buildings – including a hospital and school – collapsed when the ground shook.

“It is a long-term plan which could take years or even generations to complete, as the architect Renzo Piano told me yesterday,” Renzi wrote on his personal blog on Monday.

“The fact we have not been able to get a coordinated prevention project off the ground for the last 70 years means this isn't going to be an easy project.”