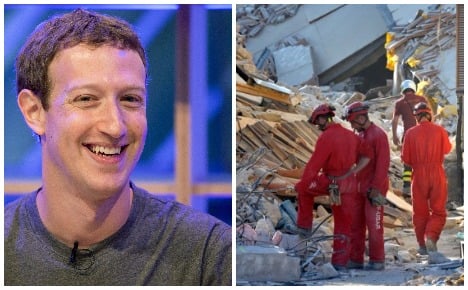 Facebook's billionaire founder announced the donation had been made in the immediate aftermath of the the 6.0-6.2 magnitude quake, which left 290 dead and 2,700 homeless, while holding a Q&A at Rome's Luiss University on Monday.

But the donation does not involve actual cash and instead comes in the form of Facebook advertising credit, which Zuckerberg says will benefit the organization in the long-term.

“Organizations like the Red Cross are going to be focused on this disaster long after the T.V cameras,” he said.

“The credits can be used to promote any activities they need, such as collecting funds, making appeals for blood donations and finding volunteers.”

In a subsequent statement, the head of Italy's Red Cross, Francesco Rocca, said Facebook had come to Italy's aid “in the most congenial way”.

“Social networks have shown how vital they can be in times of emergency,” Rocca added.

During the course of his visit to Rome, Zuckerberg also met Prime Minister Matteo Renzi.

In a Facebook post  following their meeting, Zuckerberg said the pair had discussed “how technology is helping create jobs and grow the Italian economy”.

It was a busy day for the billionaire, who attended an audience with Pope Francis alongside his wife, Priscilla, earlier on Monday morning.

“It was a meeting we'll never forget. You can feel his warmth and kindness and how deeply he cares about helping people,” Zuckerberg wrote on Facebook.