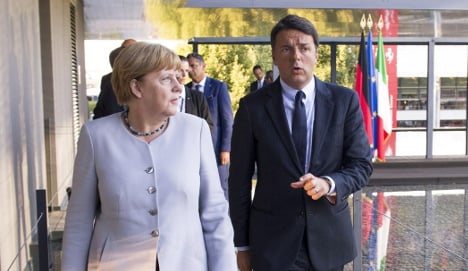 “All of us in Europe must work for the repatriation of those who do not have rights (to stay),” Renzi said after a meeting with Merkel in the Italian town home to the Ferrari sports car empire. “It is unthinkable that we can accommodate everyone.”

In comments pointing to a hardening of attitudes about how to resolve the migrant crisis reshaping politics across Europe, Merkel added: “Not everyone can stay, and Italy has the same problem, so we have a common agenda.

“Those who do not have the right to stay have to be repatriated,” she said.

The German leader was speaking a year to the day after she after she won praise and criticism in equal measure for signalling an open door policy on refugees by declaring “we can do this”, referring to people fleeing the conflict in Syria.

She said on Wednesday that she stood by her words.

“I'm convinced it was the right phrase,” she said, striking a less contrite tone than she had adopted in an interview with German daily Süddeutsche Zeitung that was published on Wednesday.

Merkel was quoted by the newspaper as saying: “There are political issues that one can see coming but don't really register with people at that certain moment.”

'We will find a solution'

“And in Germany, we ignored both the problem for too long and blocked out the need to find a pan-European solution.”

Merkel pointed Wednesday to the controversial EU-Turkey deal signed in March aimed at stemming the flow of migrants to Europe as an example of how cooperation could help “halt illegal migration”.

She added that economic incentives should be used to help would-be migrants remain in their own countries.

“It is important that we make deals with the countries of origin,” Merkel said, giving the example of the deal struck between Italy, France and Germany and Mali and Niger to promote economic growth in the sub-saharan countries.

Merkel also expressed her sadness following the death of 292 people in an earthquake that struck central Italy last weekend, saying that Germany was ready to help Italy rebuild.

“As a government we want to give a hand,” she said. “And the positive thing is that German businesses also want to contribute and the German football league wants to organize a (fund-raising) match,” she said.

Both leaders were asked if Italy would ask for budget flexibility from theEU to secure funds for earthquake damage prevention schemes.

Merkel said that Rome would need to develop a transparent proposal, adding: “I think in Europe we will find a solution.”