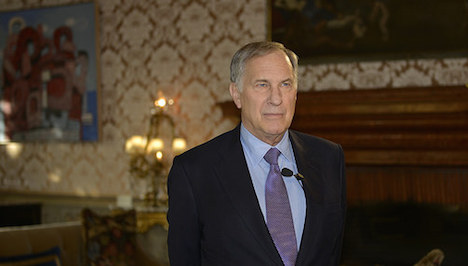 US Ambassador to Italy, John Phillips. Photo: US Embassy Italy
Ambassador John Phillips said on Tuesday that it would be “a step back for foreign investment in Italy” if reforms aimed at limiting the power of the Senate and making it easier to pass legislation were defeated.
While insisting that the referendum was “an Italian decision,” he added: “Sixty-three governments in sixty-three years do not give guarantees,” he told a seminar at the Instituto di Studi Americani i Rome, according to Ansa.
Opponents of Prime Minister Matteo Renzi’s reforms were swift to condemn the American intervention.
Renato Brunetta, House leader for Forza Italia, Silvio Berlusconi’s centre-right opposition party, tweeted: “We remind Ambassador Phillips of Article 1 of our constitution: “Sovereignty belongs to the Italian people.”
Matteo Salvini, head of the far-right Lega Nord, told the ambassador to “mind his own business, and don’t interfere.”
Even some of Renzi’s allies distanced themselves from the comments. Pier Luigi Bersani, a former leader of Renzi’s centre-left Democratic Party, said: “The US Ambassador’s comments are unbelievable. Who do they take us for?”.
However, Renzi’s Justice Minister Andrea Orlando asked for Phillips’s words to be “put into perspective.”
“It is just a tip from a friendly country,” he said.
“The Italian people… is mature enough to take account of these words to the correct extent.”
The ambassador’s comments came as rating agency Fitch warned of the impact of a No vote:
“If there was a 'No' vote, we would see that as a negative shock for the Italy economy and for Italian creditworthiness,” Edward Parker, managing director of Fitch, told a briefing in London. The comments from Fitch were widely reported in Italy and cited by opponents of the reforms as all the more reason to defeat them.
“If the Yes side in the referendum is the Masons the bankers and the big powers, then we are even more convincingly for a No,” Salvini said in response.
The referendum will be held between November 15th and December 5th.
Url copied to clipboard!