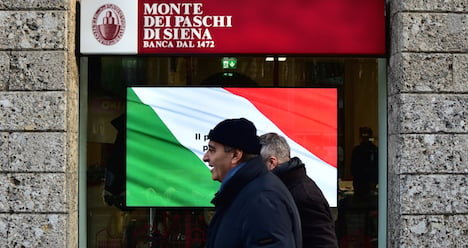 A branch of Banca Monte dei Paschi di Siena in Milan Photo: Giuseppe Cacace/AFP
Banca Monte dei Paschi di Siena said that Marco Morelli, who heads Bank of America Merrill Lynch in Italy, had been named to replace former CEO Fabrizio Viola, who resigned last week, reportedly under pressure from the government.
The chairman of the bank, Massimo Tononi, has also agreed to step down, the bank said, drawing a line under the previous management which oversaw a collapse in the bank's share price.
Fears for BMPS, which urgently needs new investment, increased in July when it was found to be Europe's weakest major bank in tests undertaken by the European Banking Authority.
The finances of Italy's third-biggest lender have raised concerns for the Italian banking sector more broadly and pose a headache for centre-left Prime Minister Matteo Renzi, who wants to avoid a state bailout.
BMPS, the world's oldest bank still operating today, unveiled a rescue plan in late July.
It would entail offloading non-performing or bad loans worth €9.2 billion euros into a separate entity, while seeking investors to inject new capital of €5.0 billion into the bank.
But to complete the process and attract private funds, it needs to overcome deep scepticism among investors, having twice tapped the market for capital in the last two years.
Its share price has dropped almost 82 percent this year, according to the Bloomberg financial news service.
Morelli, 54, previously worked at BMPS as deputy general manager from 2007-2010 and has experience at a number of foreign banks, including UBS and JP Morgan.
He will earn €1.4 million in annual salary before bonuses, and will also be paid a €300,000 one-off fee at the start of his contract.
Url copied to clipboard!