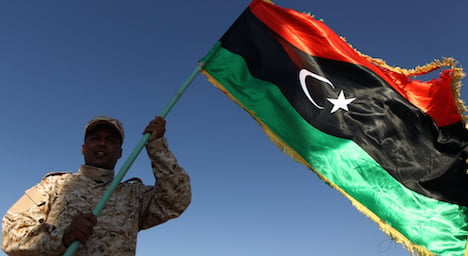 File photo of a member of forces opposed to Libya's National Unity Government. Photo: Abdullah Doma/AFP
Citing Libyan sources, the Italian press said the pair work for a ground handling company at Ghat airport near the Algerian border.
“The ministry has been informed of the situation and has been following up on developments from the moment it learnt of the case,” a ministry spokesman told AFP.
“We are working with the maximum caution, bearing in mind how delicate the situation is.”
Several Italian companies work in Libya, a former Italian colony, and their expat staff have often fallen prey to kidnappers in recent years.
In the most recent case, four Italians working for a construction company were kidnapped in July 2015 near an oil field operated by Italian giant ENI in the region of Mellitah, west of Tripoli.
Two of the hostages were killed six months into their ordeal, likely in clashes between jihadists and local militiamen.
The other two were freed in March this year, in a raid on Islamic State group hideouts near the capital.
Chaos has engulfed Libya since the 2011 NATO-backed ousting of dictator Muammar Qaddafi.