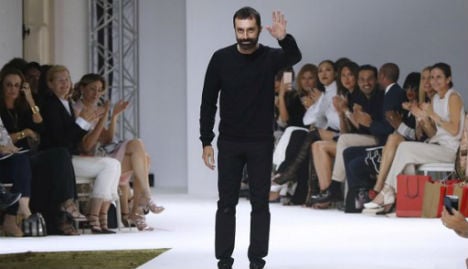 Francois Guillot / AFP
The Paris-based Roman designer has made his name with spectacularly beautiful and eye-wateringly expensive made-to-measure creations for the likes of singer Rihanna, George Clooney's wife Amal and, most recently, actress Emma Stone, who wowed this month's Venice film festival in one of his dresses.
In the process, Valli has been credited with making haute couture more relevant than it has ever been and providing a bridge between a rarified world and contemporary popular culture.
The way he sees it, it's all about ideas, and he has got so many, he needs different outlets to prevent them cluttering up his brain.
“I have the exact opposite problem of someone having no ideas, my problem is too many ideas,” Valli tells AFP in a backstage interview after the launch of his latest collection for his ready-to-wear label Giamba in Milan. “It was Karl Lagerfeld who said 'the more you do, the less you do' and that is totally right for me,” he says.
“There are other designers that work in a different way, they do one thing and it is already a lot for them. But you know for me one inspires the other one, they go in parallel.
“I have an idea and say it doesn't fit for (couture line) Giambattista Valli but it fits for Giamba, and it doesn't fit for Giamba but it does for Giambattista …. it is very nice.”
The latest Giamba show featured a soundtrack including Valli's friend and muse Soko and was staged in an erstwhile aristocratic residence in the centre of Milan, the Palazzo Litta.
'100 percent DNA'
Valli said he had imagined a back story of a young woman who had been raised in the house returning to it after a stay in Los Angeles.  After a night of partying with her oldest friends, she crashes out in her
clothes and wakes up jet-lagged at 3:00 pm, puts on some music and pads around — it was the mood of that particular moment he wanted to infuse in his latest collection.
“She walks around in the building in a very comfortable way,” Valli explains. “She is a little bit for me like Alice in Wonderland. She is the kind of young woman or girl that is not scared to experiment in life, she is not
scared to know other cultures, to mix it up, to have her own style, to be just herself…”
Being true to yourself is important to Valli. Like his compatriot Giorgio Armani he guards the independence of his operation fiercely, even if that means foregoing the additional investment that could come with a stock market listing or a partnership with a luxury brand management company.
After four seasons of the Giamba line, he says he is happy with its steady expansion.
“It is successful in a business way but it is successful too in the real world of women. And from a celebrity point of view, from an editorial (coverage) point of view. So it is very good, I am very happy.
“There is this kind of freshness it has — it's youthful, (about) embellishment, romanticism, but also a bit of the rebellion that there is in the haute couture I do. Some of the shapes come straight from the last couture
collection.”
Valli admits he felt flattered recently when he sat next to Armani's niece at an industry lunch and she highlighted the similarities between her 82-year-old uncle's business model and that of Valli, who turned 50 earlier this year.
Armani said recently that “absolute independence” was vital to him and Valli shares that credo. “Every single product that I do has to be 100 percent DNA of the house,” he said.