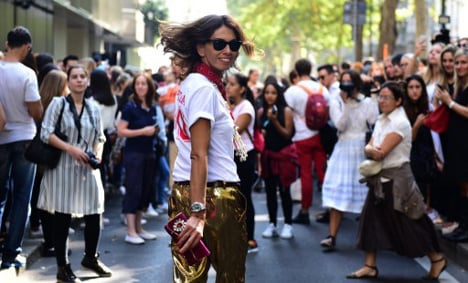 Via Montenapoleone, home to the flagship stores of the cream of Italian design, is where the conceptual currency of the catwalks is converted into hard cash.

And in its glittering stores, platinum credit cards will keep the cash tills ringing long after the fashionistas have decamped to the next catwalk fest in Paris.

Window-shopping with a friend, local Lila Sciacca says few in the city would dispute the economic benefits of fashion week: 48 million euros ($54 million) was City Hall's estimate of the revenues driven by the last bash. An amateur dressmaker, Sciacca is one of millions of fashion fans who stream live webcasts of the catwalk shows to digital devices.

But the exclusivity of the shows still rankles. “At the shows it is always the same cast of people,” she told AFP. “If you are not an insider or in the business, you have to be connected.

“And let's be frank, how many people can actually afford these clothes we are talking about when every day is a struggle to survive?”

The organizer of last year's successful World Expo, Sala recently told fashion chiefs that, “in terms of participation, there is much more than can be done.”

Among them was “Outside In”, an open air exhibition of new images by acclaimed British photographer Rankin that lined Via Montenapoleone.

A veteran of the days when the club of fashion obsessives was much smaller than it is now, Rankin says his images of models in boxes displaying different emotions was designed as a celebration rather than a critique.

“I really hate elitism in itself, so I am probably the opposite of most of the industry,” he said.

“But the art of fashion is something I have come to appreciate more and more so I did not want (the street exhibition) to be negative, I wanted it to be a celebration of what it is about.” The vast followings of models like Gigi Hadid, Kendall Jenner and Cara Delevigne have made them hugely influential players, giving them the kind of commercial clout that was once the preserve of a handful of editors of glossy magazines.

Rankin, the co-founder of influential 1990s style magazine Dazed & Confused, says the change is exciting, even if he has some misgivings.

“I love photography so much I can't not get excited by a whole new generation that maybe would never have had the opportunity to learn or even think you can go to college to do photography.

“At the same time I studied for six years to become a photographer so when somebody shows me their Instagram picture I go slightly 'whoah'.

“David Bailey had a great quote when he was asked about Instagram and social media and said 'It is just lots more people taking bad photos'.

“Instagram and social media and being able to buy straight form the catwalk is the antithesis of what it used to be about.

“It used to be a small world but it has gone from 100,000 people to maybe two to three million that are absolutely obsessed by it.”

The Rankin exhibition was the latest in a series commissioned by Guglielmo Miani, president of the Via Montenapoleone Association, an organization comprised of 140 luxury brands associated with the famous street.

Miani says allegations of snobbish exclusiveness are wide of the mark. “The truth is that this is a working week for professionals so it is, in a way, a closed circuit. That is why we decided to have an open-to-everyone exhibition.” Growing online sales are also part of the disruptive wave fashion is currently surfing but Miani is confident it is one Via Montenapoleone and its counterparts in London, Paris and elsewhere can ride out.

“The (store) experience is getting more enriching all the time,” he said. “We just saw the new Dolce and Gabbana store opening, Brunello Cucinelli is opening soon. The physical space of the store is still very important.

“Globally e-commerce is about ten percent of luxury goods. It is going to grow but at the same time there are markets like Iran that are going to want to buy clothes and they will want to have stores there.

“Via Montenapoleone will be around for another 100 years, maybe 200 years and hopefully it will be even more special than today.”