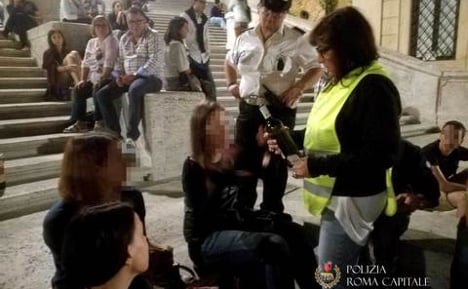 A picture of the incident circulated by police. Photo: Rome police

The staircase is subject to surveillance from both uniformed and plainclothes police officers, day and night, following a year-long restoration project which was celebrated with a spectacular opening ceremony on Thursday night.

But on Friday evening, seven tourists were hit with a €900 fine (around €130 each) after police caught them drinking on the steps.

Among them were two Lithuanians, two Poles, two Sri Lankans and one Italian, police said. During the renovation, Italy's Culture Minister Dario Franceschini suggested that a gate be installed and the steps be closed to the public at night.

Paolo Bulgari – boss of the fashion house which financed the clean-up – said he feared a return of “barbarians” to the steps, however recently elected mayor Virginia Raggi rejected this idea, and said the staircase would remain open 24/7, with an increased police presence.

“All of us need to be responsible for this gem because the city belongs to all of us,” Raggi said on Facebook.

As well as eating and drinking, forbidden behaviour on the steps include setting up bedding, sticking up posters, littering, and otherwise loud or unruly behaviour.