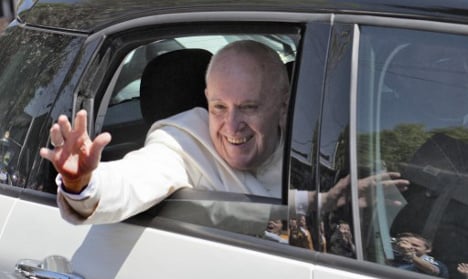 The Polish chapter of the Catholic charity Caritas is auctioning off the three vehicles used by the pontiff in July, with online bidding to continue until October 9th.

“In accordance with the wishes of Pope Francis, the profits will go towards the purchase of a mobile clinic for treating Syrian refugees in Lebanon,” Agnieszka Homan of Caritas Poland told AFP.

The navy blue VW Golf cars with licence plates “KI POPE”, “K2 POPE” and “K3 POPE” all come with certificates detailing the routes travelled by the pontiff in each vehicle.

Located in Czestochowa, the monastery is home to the Black Madonna, an ancient Catholic icon of the Virgin Mary that is believed to work miracles.

Francis used the other cars to travel around Krakow and visit the former Nazi German death camp Auschwitz.

The Catholic youth extravaganza in late July drew hundreds of thousands of faithful from across the globe to Poland, where the pope championed the rights of migrants and refugees.

We “embrace with particular love our brothers and sisters from Syria who have fled from the war,” Francis had told the cheering crowd at the festival.

Officially, Poland's right-wing government has been staunchly opposed to accepting refugees because of security concerns – a view shared by a significant portion of the ethnically homogenous population of 38 million people.

Caritas Poland has already sold off several of the gifts received by the pope during World Youth Day, including a pair of shoes for 28,000 zloty.