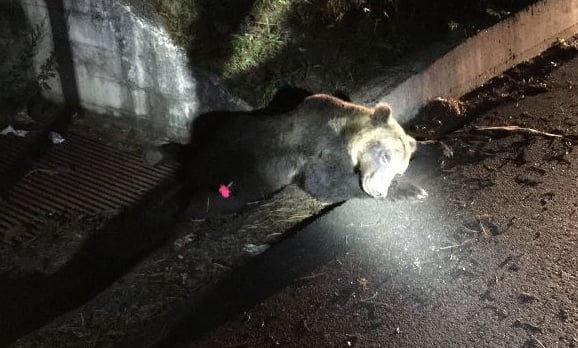 The bear was a young male, the National Park of Abruzzo, Lazio and Molise said, and had likely been hit by a heavy vehicle in the Roccaraso area.

A local resident spotted the injured animal and alerted the State Forestry Corps at 3:15am. The bear, who had suffered multiple serious fractures, was sedated and transported to the vet, but it was not possible to save him and he died shortly before midday on Tuesday.

Police have opened an investigation into the death, and called on motorists to respect speed limits and pay attention to bears and other wildlife.

The park noted that the subspecies of the Marsican bear has been “increasingly threatened by road accidents in recent years”.

The Marsican or Appennine bear is critically endangered, and is found only in the National Park and the surrounding locations. Fewer than 50 of the bears are thought to be alive in Italy.

Their existence is threatened by poaching, poisonings and road accidents, as well as the ongoing urbanization of the area.

Over the past few years, the park and the Italian branch of the World Wildlife Federation have worked to increase the population of the Marsican bear.

Earlier this year, the park opened a museum dedicated to the subspecies in order to raise awareness, and last week a meeting was held with local residents to educate them about the problems facing the bears.