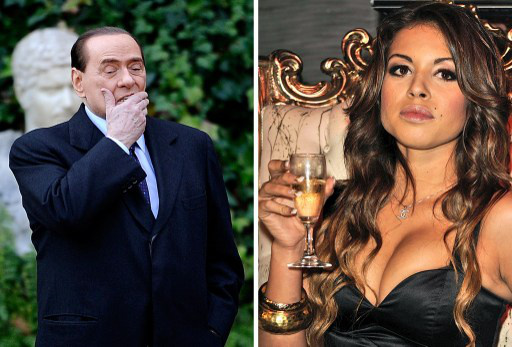 'Ruby', an exotic dancer of Moroccan origin whose real name is Karima El Mahroug, was at the centre of the scandal over Berlusconi's notorious 'Bunga Bunga' sex parties.

A decision on whether Berlusconi, 80, will face trial in the case was postponed as the billionaire tycoon did not attend pre-trial hearings, citing health concerns following open-heart surgery in June.

Also sent for trial by judge Laura Marchiondelli was lawmaker Mariarosaria Rossi, a senator for the tycoon's Forza Italia party.

Prosecutors suspect Berlusconi bought the silence of the young women who attended his 'exotic parties' by giving them cash, jewellery and even properties worth millions of euros.

Evidence presented in his trial for having sex with Ruby when she was under age indicated that he gave her gifts worth seven million euros ($7.8 million).

She testified in that trial that she had not had sex with the tycoon, claiming she had lied when she was recorded on a wiretap telling friends that she had.

Berlusconi was initially convicted of the charge but acquitted on appeal, the judge accepting that he had not known Ruby was a minor at the time of their encounter.

READ MORE: The best quotes from the Berlusconi-Ruby trial