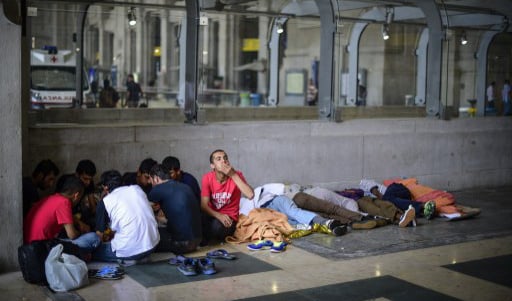 A group of migrants pictured at the city's train station in June. Photo: Olivier Morin/AFP

Around 700 migrants were staying at the via Sammartini hub near Milan's central train station over the weekend – a space only intended to accommodate 150.

Over 70 were forced to sleep outside the hub in sleeping bags, while others were accommodated in the canteen and reception area.

By Tuesday night, things had settled down slightly but the centre was still hosting almost three times as many people as it was intended to.

As winter approaches and the number of migrants in the northern city – Italy's wealthiest – nears 4,000, local authorities have called for more support from the Interior Ministry. Each night, Milan faces the problem of how to accommodate up to 5,300 people, including around 3,800 migrants and homeless people.

Milan's councillor for Social Policies, Piefrancesco Majorino, said on Monday that the city was no longer able to guarantee accommodation to those arriving at nighttime.

“The centres are overcrowded and we have to give priority to women and children. As for the men, if they arrive late, we cannot guarantee them accommodation,” said Majorino, according to La Repubblica.

“We are at a high risk of not being able to manage the situation,” he added.

Groups of migrants are staying in a disused gym and local library, with numerous volunteer organizations providing meals and bedding, however long-term solutions are not forthcoming.

Majorino said he had asked the prefecture to relocate asylum seekers outside the city, in order to free up space for those who were 'in transit' and heading to northern Europe, but on Wednesday said he had not yet had any response from the Interior Ministry.

The problem of overstretched centres in Milan was flagged up in August, when mayor Giuseppe Sala commented that the city was struggling to cope with the huge pressure on its reception centres.

Several local charities have mobilized to accommodate refugees, including the Jewish community which has accommodated 70 refugees each night at the Holocaust Memorial, but the city is running out of options.

Sala suggested the use of former prisons, where there are large amounts of empty space, and adequate security, and added that he hadn't ruled out using tent accommodation if necessary.

He also expressed frustration at the resistance of Lombardy's regional president, Roberto Maroni, to the use of the former base camp for the Milan Expo as refugee accommodation.

Some 132,000 mostly African migrants have landed on Italy's southern shores since the start of 2016; a rate of arrivals that has been steady for the best part of three years now.

Thousands more have reached the country overland, and following the closure of Italy's borders with France and Switzerland, more migrants are staying in Italy long-term rather than simply passing through on their journey to northern Europe.

The average length of stay in reception centres has increased over the past year from six days to 20.

To make matters worse, the majority of centres haven't received a cent of their promised government funding for months. The lack of money has left many of the smaller centres unsure how much longer they can continue to offer their services.

Italy's budget for migrant reception, which exceeded a billion euros in 2015, was only partially renewed for 2016. According to press reports last month, there is a funding shortfall of €600 million to clear existing debts and another €400 million needed to get to the end of the year.