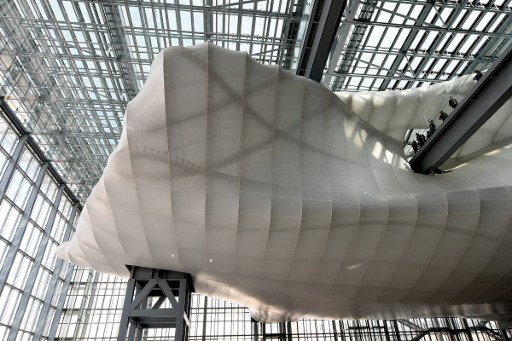 The Italian's latest work resembles a giant, rectangular glass box encasing an interior dominated by a fluid, cloud-like structure that seems to float above the centre's lower levels and houses its auditorium. Made from steel and clad in cream-coloured fibreglass the centrepiece of the new centre is the size of two giant zeppelin airships.

It has been dubbed Fuksas's “nuvola” (cloud in Italian), and its creators hope the innovative design will help turn the new facility into a popular destination on the money-spinning international conference circuit. The project has had a chequered history since Fuksas's won the competition to build the new centre in 2000 with a design based on an idea he had while watching clouds from a beach.

Located in the Mussolini-created EUR district of Rome, the project was initially supposed to be privately funded but failed to attract investors.

Publicly-backed construction finally got underway in 2007, only to be repeatedly interrupted due to a combination of red tape and cash constraints. The building has finally been completed at a total cost of 353 million euros ($390 million) thanks to additional funds raised last year by the sell-off of four Mussolini-era buildings, said Enrico Pazzali, the head of EUR Spa, the public body behind the project.

“The architect's wonderful vision has been realized 100 percent,” he told AFP, adding he was confident the centre would deliver its objective of delivering a major boost to Rome's visitor-based economy.

“Our estimates are that the economic benefits to the city and the surrounding area could be between 250-350 million euros a year,” he said. Built over three levels, the new centre will be able to accommodate audiences of up to 6,000 people in its 9,000 square-metre plenary hall. Fuksas, 72, is one of the giants of contemporary Italian architecture.

His past projects include the futuristic new airport terminal at Shenzhen, China, Ferrari's ultra-modern headquarters and Armani stores on 5th Avenue, New York and in Ginza, Tokyo. 
The EUR district takes its name from Esposizione Universale Roma, the world fair Italian dictator Benito Mussolini planned to stage there in 1942.

That plan had to be scrapped because of World War II, with many of the buildings only half-finished. They were mostly completed in the 1950s and 1960s after the Roman authorities decided to turn the area into an edge-of-town business district that became a model for London's Docklands and La Defense in Paris.

The rectangular exterior of Fuksas's new work references the rationalist architecture of many of the surrounding buildings.