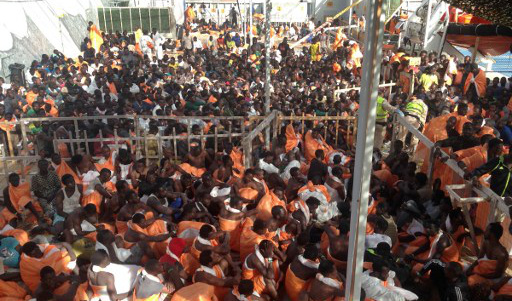 Migrants wait to disembark from the Siem Pilot ship in Palermo. Photo: AFP

One little girl appeared to have been crushed during the frantic rescue, while some of the men had gunshot wounds – witnesses say the migrants were attacked by armed men in Libya before departure, Repubblica reported.

The Palermo public prosecutor's office has opened an investigation into the alleged attack.

At the port of Naples, an Italian coastguard boat brought 465 migrants early on Monday morning, the majority of whom were unaccompanied minors.

Five mothers with small children were also brought ashore from the boat, along with the corpse of a 24-year-old pregnant woman.

Almost all of the migrants were barefoot, or used plastic bags to cover their feet.

Before they could disembark, health professionals boarded the boats to carry out medical checks on the migrants, who were then photographed and registered. Over the coming days, they will go to different reception centres around the country, while unaccompanied migrants will be assigned to a legal guardian.

This group join the 279 people who have arrived in Italy in recent months under the project, which anticipates the arrival of around 1,000 particularly vulnerable refugees.

The associated costs – of hospitality, legal aid and Italian lessons, for example – are covered by non-profit organizations, drawing mainly on religious donations, while families are housed initially with volunteers.

“Italy is playing its part in a civilized way, but obviously we can't go it alone,” Gentiloni said, asking that the rest of Europe also play its part in accepting refugees fleeing war.

“We can have a kind of migration that cuts off trafficking, we should work for acceptance and rescues at sea, but we can't have civilization in one country alone. So if Europe doesn't support this effort in every possible way, I believe it is denying its own principles of civilization.”

Gentiloni, along with Interior Minister Angelino Alfano and Premier Matteo Renzi, has made repeated calls for other EU countries to play a greater role in accepting refugees fleeing war, tens of thousands of whom have arrived on Italian shores in 2016 alone.

READ ALSO: 'Italy has a big heart, but we can't take everyone in'