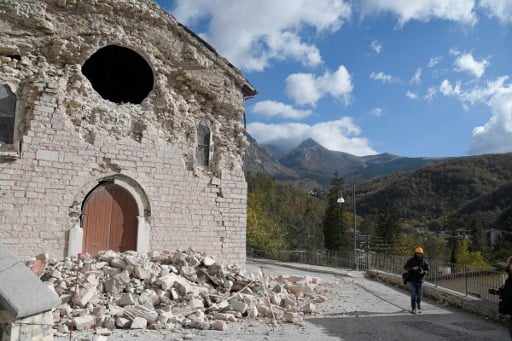 Sardinia is the only part of Italy not affected by seismic events, according to Italy's Civil Protection Agency.

The agency notes that there is an elevated risk of earthquakes in Calabria and Sicily as well as some northern areas, like Friuli, part of Veneto and western Liguria.

The central-southern part of the Appennine mountain range is also notorious as a seismic hotspot and has seen numerous quakes over the years – even though it isn't on a tectonic plate boundary.

The Appennine mountains have complex tectonics with many active faults; pressure builds up and is periodically released through moderate earthquakes.

Over the last seven centuries, there have been “between 20 and 30” large, damaging quakes in the central Apennines, according to UCL's Institute for Risk and Disaster Reduction.

The latest tremors had their epicentres near the village of Montereale, located close to Amatrice and in the L'Aquila province. The provincial capital, a town of the same name, was the scene of a powerful earthquake which killed more than 300 in 2009.

Wednesday's quake was felt in Rome, Florence and Naples. Although these cities are unlikely to experience quakes above a moderate magnitude – the Italian capital has never recorded a quake of a greater magnitude than 4.0 – they are considered “vulnerable” to seismic activity.

This is because of the amount of people living there, instability of buildings and the huge amount of cultural heritage and monuments which could be affected by tremors.

The Civil Protection Agency breaks down the different factors which lead to injuries, deaths and damage from a quake, encompassing the strength of tremors and vulnerability to the area.

“Italy has a medium-high seismic hazard (due to the frequency and intensity of phenomena), but very high vulnerability (due to the fragility of building, infrastructural, industrial, production and service assets),” the agency explains.

It adds that Italy has a “high seismic risk” overall, because of an increased 'exposure' to earthquakesdue to the high density of population and heritage. In other words, earthquakes are fairly frequent and strong, and those which occur are very likely to cause damage.

The map below, created by Italy's National Institute for Geophysics and Volcanology (INGV) shows the risk of seismic activity across the country.