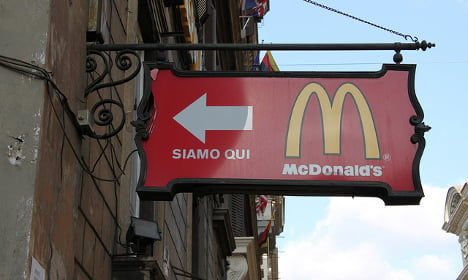 Another Italian McDonald's: The chain has been causing outrage in Italy for 30 years. Photo: Richard Allaway/Flickr

In one day, the petition has amassed over 24,000 signatures, leaving it just a few hundred away from completion.

The American fast food chain filed the lawsuit against Florence last week, following the city's refusal to let the golden arches set up shop in the famous Piazza del Duomo.

McDonald's accused mayor Nardella of back-tracking on his original decision, and claimed it had lost out on money, having made significant changes to its business plan to fit in with local regulations.

The petition was set up by a French citizen, Yann Web, who calls on the EU to help Florentine in its battle to protect its cultural heritage from multinational corporations.

“We, European citizens, support the courageous city of Florence and its mayor Dario Nardella in this fight,” the petition reads. “Let's protect the heritage of the historic centre of that magnificent city, Florence.”

Web argues that it's unfair for large multinational companies to take legal actions against regions which are trying to protect their “culinary identity, values and heritage”. The petition also labels the lawsuit “an obstacle to freedom of business”.

Florence's centre-left mayor, Dario Nardella, turned down the McDonald's application in June, in a decision that was confirmed the following month by a technical panel in charge of preserving the city's heritage.

“McDonald's has the right to submit an application, because this is permitted under the law, but we also have the right to say no,” Nardella told the city council, saying he wanted to support “traditional business” in the area.

There are three other McDonald's restaurants in the city, just a short walk from the square – but opening in Piazza del Duomo itself, which is a Unesco World Heritage site, was a step too far.

McDonald's, along with other foreign fast food chains, has a problematic history in Italy. Its first restaurant opened up near the Spanish steps in Rome 30 years ago, sparking protests. Fashion brand Valentino, which has its Rome headquarters nearby, complained about the smells and noise from the restaurant, and the opening also sparked the now global Slow Food movement.

And Florence has taken the struggle to protect its culinary history particularly strongly.