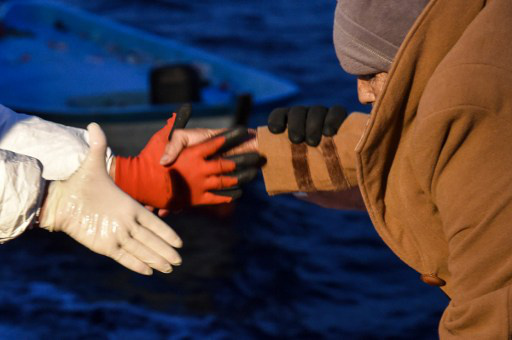 The coastguard would only confirm that a merchant ship had gone to the aid of the stricken dinghy on Monday and that 15 people had been rescued, before being transferred to the Diciotti, a coastguard vessel.

“They are now being taken to Catania (in Sicily) and for the moment we cannot confirm any other news or numbers,” a coastguard spokesman said.

It would be extremely unusual, if not unheard of, for traffickers to set off from Libya with as few as 15 people on the kind of vessel which is typically crammed with between 100 and 150 migrants.

Fears of a new major tragedy mounted as harrowing testimony emerged from another of the five rescues coordinated by the coastguard on Monday.

A total of 550 people were saved, according to the coastguard, while charity group SOS Mediterranee said six people had died during the operation its boat, the Aquarius, was involved in.

Mathias Menge, coordinator of the rescue team, said: “The survivors told us their boat had started taking on water two hours after leaving Libya.

“When the Aquarius arrived (more than seven hours later) it was full of water and starting to deflate. We did what we could but unfortunately six people lost their lives in this tragic incident.”

As often happens, the approach of a rescue ship triggered a panic which ended with many of those aboard the dinghy in the water.

Menge said there had been 24 minors on the dinghy, including three children under five, and eight women.

Back from the brink

One young boy was plucked unconscious from the water.

“He had inhaled fuel fumes and sea water but happily we got him in time,” said Sarah Giles, one of the on-board doctors working for the Medecins Sans Frontieres charity.

“He was unconscious for two hours but we were able to stabilize him before he was evacuated by helicopter.

“It was a very difficult day for the medical team, we had to provide emergency treatment to many people in a critical condition.

“When they arrived on the deck, many of the survivors were traumatized, soaked in fuel and crying. They were so grateful to be saved.”

Five bodies were recovered but the corpse of at least one drowned person spotted in the water could not be picked up.

“Heart-breaking to witness people drowning in front of us,” the MSF team said on Twitter.

Survivors were treated for hypothermia, intoxication by fuel fumes and severe burns.

“Nobody should have to endure such conditions,” Menge said.

“This latest tragedy underlines once more the dangers of the Mediterranean and the pressing need to maintain search and rescue operations throughout the winter.”

The latest deaths add to a tally of 4,271 mostly African people who have died trying to cross the Mediterranean this year, according to the UN refugee agency.

This year is already the deadliest on record for migrants trying to reach Europe with uncertainty about the situation in conflict-torn Libya fuelling a higher volume of departures in difficult weather conditions at the onset of winter.