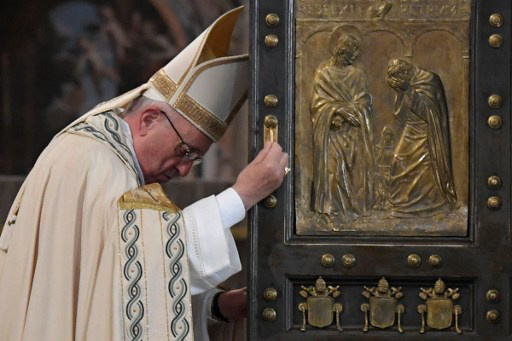 “I henceforth grant to all priests, in virtue of their ministry, the faculty to absolve those who have committed the sin of procured abortion,” the pope wrote in an apostolic letter marking the end of the “Year of Mercy”, which wound up on Sunday.

“The provision I had made in this regard, limited to the duration of the Extraordinary Holy Year, is hereby extended,” he wrote.

The Argentine, 79, said he had to “restate as firmly as I can that abortion is a grave sin, since it puts an end to an innocent life”.

On Sunday, as he brought the jubilee to an end by closing the bronze-panelled Holy Door in Saint Peter's Square, Francis gave an interview in which he slammed abortion as “a horrendous crime”.

But he said on Monday that the end of the special year did not mean the end of mercy itself, and so-called sinners must be given a chance to repent. The Catholic Church considers abortion to be a sin.

“I can and must state that there is no sin that God's mercy cannot reach and wipe away when it finds a repentant heart seeking to be reconciled with the Father,” Francis said in the letter.

“May every priest, therefore, be a guide, support and comfort to penitents on this journey of special reconciliation.”

The forgiveness stretches not only to women who have abortions but those who carry them out or are involved in any way.

The watchword of mercy has meant helping the unfortunate, and welcoming outcasts back into the fold.

Francis hopes greater compassion from a more open-minded Church will not only counter xenophobia but also draw people to pews.

“The concession on abortion has had little practical effect in places such as the United States, where many bishops had already delegated permission to priests to forgive the sin,” wrote Vatican expert John Allen on the Catholic Cruxnow.com website.

“But symbolically it's been interpreted as a major gesture of outreach to women,” he said.

The letter, entitled Misericordia et Misera (“Mercy and Misery”), was signed by Francis at the end of a mass closing the jubilee.

Critics have said his emphasis on mercy reduces the gravity of perceived sins, but the pope said rigidly sticking to “the level of the law is equivalent to thwarting faith and divine mercy”.

He also stressed that priests had to help members of their flock on a case by case basis, rather than using a one-size-fits-all approach to “sinners”, saying: “the works of mercy are 'handcrafted', in the sense that none of them is alike”.

Francis has been challenged by traditionalists over his “flexible” attitude to Church teachings, particularly regarding the hot-button issue of whether divorced and remarried couples should be able to receive communion.

The Argentine, who has repeatedly called for “a poor Church for the poor”, also said in the letter that he wants the Church to celebrate a World Day of the Poor in November each year.