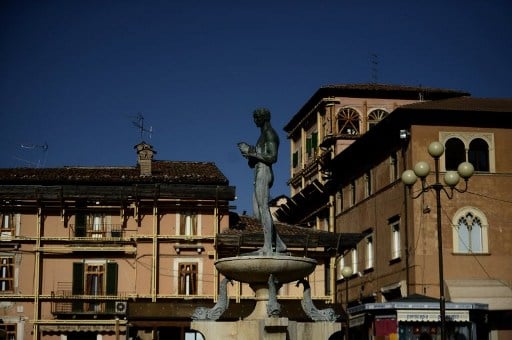 Buildings damaged in the 2009 quake in L'Aquila, where a new tremblor was felt on Tuesday evening. Photo: Filippo Monteforte/AFP

A quake measuring 4.4 magnitude, at 17.14pm on Tuesday, was recorded by Italy's National Institute for Geophysics and Vulcanology. The epicentre was 22km away from L'Aquila, which was hit by a deadly earthquake in 2008, and the affected towns were Capitignano, Montereale, Campotosto, Barete and Cagnano Amiterno.

The tremblor was also felt in Amatrice, the town recovering from August's deadly quake, but no new building collapses have been reported.

In Emilia Romagna, an earthquake was felt at 6:52am on Wednesday morning, with its epicentre in Bagnolo in Piano, Reggio Emiliia. It followed a series of smaller tremors which took place throughout Tuesday night.

Fire fighters carried out checks on buildings and schools in the morning, however the local schools all remained open on Wednesday.

Concerns over structural stability of Italy's schools were raised after the collapse of Amatrice's main school – which had supposedly been renovated to seismic standards – in the August 24th earthquake which killed 299. Almost a third of the schools in the central Italian region were unfit for use following the disaster.

However, no injuries or damage to buildings were reported on Wednesday.

In fact, local paper Il Resto del Carlino said that one of the main problems fire fighters were called in to deal with was assisting residents who had rushed out of their houses in panic, and ended up locked out.

It was a calmer night in the central Italian region which has been rocked by thousands of aftershocks following two quakes measuring above 6.0 magnitude in late October.

The most significant tremor recorded there was one of a 2.9 magnitude near Castelsantangelo sul Nera, in Macerata. This was one of around a dozen quakes above a 2.0 magnitude, but none caused any further collapses in the region still recovering the major tremblors.