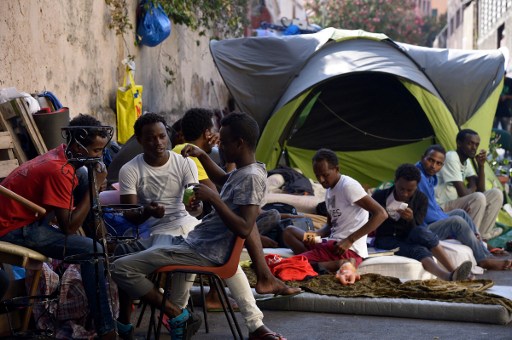 The UN's refugee agency (UNHCR) has written to the mayor of Rome voicing alarm over the hundreds of migrants sleeping rough on the capital's streets while thousands more with legal residency are forced to live in squats.

“We have been highlighting this problem for months and our worries have only increased,” said Carlotta Sami, UNHCR's spokeswoman in Italy.

The protest to Virginia Raggi, Rome's recently-elected new mayor, comes a year after the closure of a large informal reception centre located close to the capital's Tiburtina train centre led to a spike in the number of migrants sleeping on the streets, often in makeshift camps that are regularly dismantled by the authorities.

Sami said Rome's could learn from Milan, where the city authorities have established a migrant reception “hub” with the express purpose of keeping people off the streets as winter sets in.

Raggi, a member of the populist Five Star Movement, said recently that her administration's priority was to stop the flow of migrants into the city.

The UNHCR said the Rome authorities could not turn a blind eye to thousands of refugees and other people granted leave to remain in Italy who were currently living in squats or informal camps in the centre of the Eternal City.

“This reality means there has to be reflection on developing concrete integration policies,” UNHCR said in its letter.

Italy has registered a record 171,000 migrant arrivals at its southern ports this year and its neighbours tightening of their borders has meant more than ever are staying in the country, stretching reception facilities like never before.