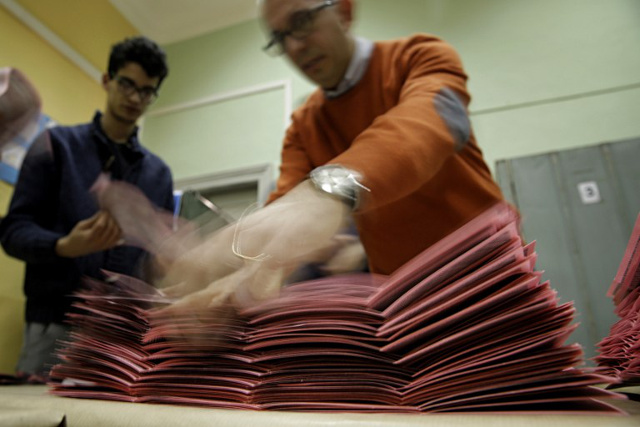 Ballots being counted in the crunch vote. Photo: Marco Bertorello/AFP

Renzi, 41, snatched power in February 2014 and pledged reforms across the board, from the education system to justice and employment.

Vocal in the media and on social networks, he failed however to win the trust of the electorate and admitted on Sunday to feeling “anger, disappointment, bitterness and sadness” after his crushing referendum defeat.

Italian press reports from “behind closed doors” in the PM's office painted a Renzi in tears who said he wanted nothing but to jet off to sunny climes for peace and quiet. For the time being he is still the head of the centre-left Democratic Party (PD), and has in his pocket the votes of 13.4 million Italians who trusted him by voting 'Yes' to his reform.

Before the referendum, 31 percent of voters backed the PD according to polls.

Beppe Grillo, 68, comic and founder of the anti-establishment Five Star movement (M5S), is dining out on a win many analysts see as a rejection of traditional parties and politics. The Five Stars snapped up a quarter of votes in the 2013 elections and have scored important victories since – mayoral races in Rome and Turin in particular.

With up to 30 percent of voters supporting the anti-euro party, Grillo is calling for early elections. But the movement has refused to ally with other political parties from the start, and M5S would find it impossible to snap up the majority it needs to govern alone.

Matteo Salvini, 43, heads up the anti-immigrant Northern League party and has tried – but largely failed – to extend its reach beyond the rich north into the poorer southern heartlands by playing the anti-euro card and railing against migrants.

Though it can only boast up to 14 percent of voter support, the League also wants early elections, preceded by a primary in January to unite forces across the right and create a block to challenge the Five Stars and the left.

Silvio Berlusconi, 80, is a three-time former prime minister and head of the centre-right Forza Italy party. Largely absent from politics – though not from the gossip pages – following his ousting in 2011, he retired further from the spotlight after heart surgery in June. Jumping on the 'No' bandwagon at thelast minute, he has now taken a place at the victors' table.

He wants early elections, has ruled out Salvini's plan for primaries, and demanded changes to the electoral law which would free him from having to form a coalition with the Northern League.

Pierluigi Bersani, 65, is head of old guard at the PD. Party leader before Renzi snatched his job, he fought against the reforms, saying they would give one man (Renzi) too much power. He wants a party congress, but not necessarily early elections.

Dario Franceschini, 58, is minister of culture, a former PD party secretary and a touch stone for influential left-wing Catholics. He has been named a possible candidate to take over now from Renzi, though analysts say a non-politician is more likely for the job.

Mario Monti, 73, is a former European Commissioner who was appointed in 2011 to head up a “technical” government after Berlusconi's ouster. He urged voters to say 'No' to Renzi's reforms but did not want him to resign.

He has accused foreign analysts of hyping up coverage of the referendum and wrongly describing Renzi's downfall a victory of populism or anti-Europe sentiment. He wants a government based on the outgoing majority, which remains intact in parliament.