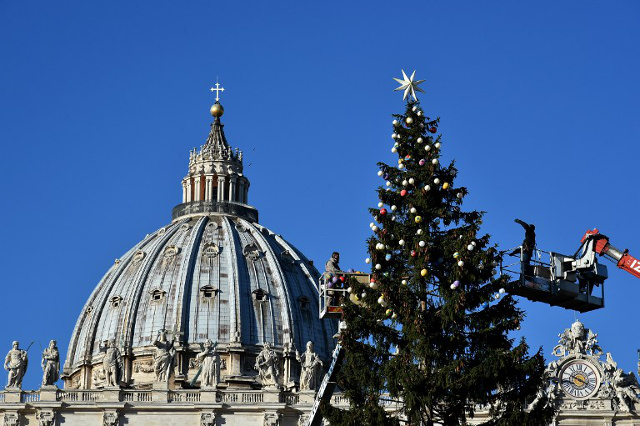 The finishing touches are added to the tree outside the Vatican. Photo: Vincenzo Pinto/AFP

The lights of the Christmas tree outside Piazza Venezia in central Rome were turned on by mayor Virginia Raggi on Thursday – watch the illumination in the video below.

And at St Peter's Square, the tree is accompanied by the traditional Nativity scene.

The lights in Milan were turned on on December 7th, to celebrate local public holiday, the Feast of Saint Ambrose.

The Basilica of Saint Ambrose.

The Galleria di Vittorio Emanuele, one of the world's oldest shopping centres.

And of course, the Duomo.

A spectacular light show marks the start of the festive season in this small town in Lombardy.

The Lazio region made sure Amatrice and the other towns still recovering from August's deadly earthquake were able to share in the Christmas cheer.

Amatrice. The Christmas tree has been turned on. This is how life returns, the future is being rebuilt.

Earlier in the week, a skydiving Santa Claus had descended on the town to hand out sweets and gifts to children, as well as a donation to the heads of local schools.

The porticoes which line many of student city Bologna's streets have had a sparkly makeover for the holiday season.

In the Veneto village, this ski destination is a perfect place for a cosy Christmas.

The northern city has marked the start of the holiday season in style with this bejewelled tree.

Livigno, in the Alps

It's hard to feel anything but Christmassy at this mountain village near the Swiss border.

Como puts on a brilliant festive light show, with moving illuminations on buildings around the main piazza.