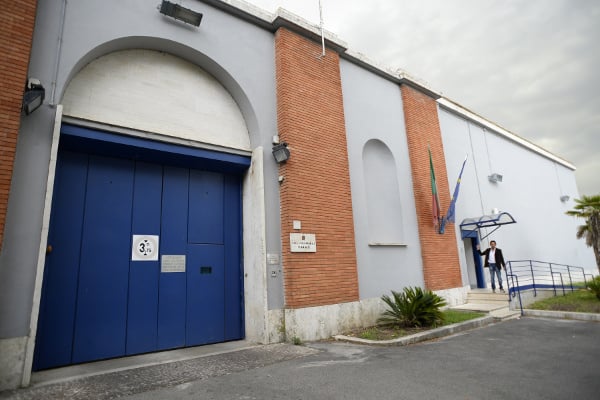 The outside of the Rebibbia prison. Photo: Andreas Solaro/AFP

Using sawed bars and knotted bedsheets, the three were able to flee down the wall and out of the prison on October 27th.

All three remain at large and are considered dangerous. One was serving a life sentence for murder, arms trafficking and involvement in a prostitution ring, while another was due for release in 2041, having been found guilty of attempted murder, and drugs and arms trafficking.

The third was serving jail time for pimping and drugs trafficking, with his sentence set to end in 2020.

Now fourteen officers at the Rebibbia prison, including its former director Mauro Mariani, face investigation for security breaches which allowed the escape to happen.

The staff, including are accused of “omission of due care” and “violation of regulations”, Il Corriere reported.

Investigators flagged up “very significant deficiencies” in their report, which has been submitted to the Minister of Justice.

Searches of the inmates' cells uncovered mobile phones, drugs and “offensive weapons”, while it emerged that surveillance had not been carried out routinely and the prison's security monitor had been left unmanned.

The alarm was not raised for nine hours after the escape, when another inmate reported the three missing – even though prison officers had reportedly seen the bedsheets hanging out of the window.

The most significant problem is that this wasn't the first example of such an escape.

In February, the same technique was used by another convicted killer serving time in Rebibbia, who escaped along with a fellow inmate, prompting a national manhunt.

After this incident, an investigation took place and security breaches were supposed to have been fixed. It was the failure to do this, according to the prosecutors, allowed the second escape to happen.

Questions have also been raised over why the three men were housed in a lower security area of the prison, given the serious nature of their convictions.

They were among 39 inmates of Camerino prison who were moved to the Rome jail as part of a mass evacuation after central Italy suffered a series of destructive earthquakes.