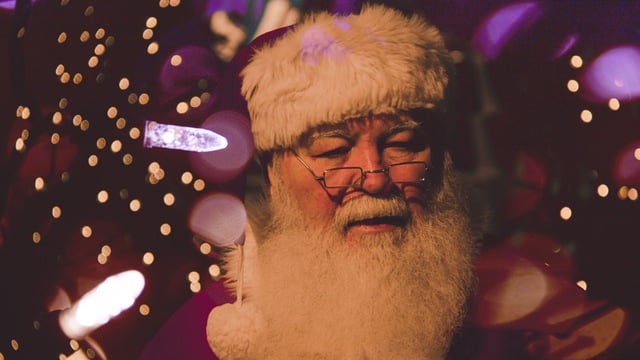 Buon Natale, tutti. It’s Christmas time and the North Pole isn’t the only place with a Santa Claus. There’s also another in Rome, in the homey neighborhood of Testaccio about two miles south of the Colosseum.

This Santa isn’t quite as fat and not nearly as pleasant. In fact, after 2016, this Santa is pretty pissed off.

Here’s my list of gifts for all those who were naughty and nice in 2016.

Poste Italiane: The Budweiser Clydesdales. With Italy’s first Pony Express, our mail will be delivered faster than it is now.

Jude Law: An Emmy. His performance in “The Young Pope,” the 10-part HBO series that starts in the U.S. on January 15th, is astounding. I saw it up close as an extra but you will be able to see for yourself from your living rooms.

Beppe Grillo: A stage. The former comic and founder of the Five Star Movement can explain his quest of returning to the lire in a comedy club where it belongs. James Pallotta: A new stadium. A.S. Roma’s owner is trying to build a $1.5 billion stadium in a city where building a kitchen extension takes a year of red tape. A.S. Roma can’t finish ahead of Juventus without it.

Francesco Totti: A Europa League title. The most popular Roman since Caesar Augustus, Totti, 40, would be the first A.S. Roma player to win two major titles — in his 25th and last year in a Roma uniform.

Tiber River: A drain. I’ve seen 19th century photographs of people swimming in the Tiber. Today, people die falling in, not by drowning but from all the diseases.

Giolitti: A sense of humor. I have the dishonourable claim of being the only person I know who’s been thrown out of a gelateria. Giolitti, Italy’s first gelateria, is in my Testaccio neighborhood. One time the old owner asked me if I wanted panna (whipped cream). I said, “Yes. Gelato without panna is like sex without an orgasm.” All the other gelato jockeys in Rome think that’s funny. He pointed toward the door and said, “VAI VIA! (GET OUT!)” I did. And I never went back.

Ama: A road map. Rome’s road clean-up company needs to find outlying roads such as Laurentina and Pontina and Andreatina. They are lined with so much trash, driving to the beach feels like driving through rural India.

Pope Francis: Early sainthood. He has taken the Catholic Church out of the Dark Ages for the first time. No pope in my lifetime has been more progressive.

European tourists: Deodorant. Garbage isn’t the only thing that smells in Rome during the summer. The Colosseum: A new floor. A 25-million-euro makeover was completed in July and the next project is a stage to hold high-end cultural events. Fortunately, one of those events will not be Bruce Springsteen.

Testaccio: A sports bar. My wonderful neighborhood has everything I need: a great public market, one of the city’s best pizzerias, a fun beer and wine bar, quiet piazzas. But it has nowhere to watch sports. The closest is On the Rocks which doesn’t open until 6 p.m. and turns into a nightclub for 20 somethings by 11.

Marina Pascucci: My continued devotion. To live in Rome, you must be in love. My girlfriend has made my life here resemble what I saw in movies. I way out-kicked my coverage on this woman.

John Henderson is a writer and expat living in Rome. A longer version of this article was originally published on his blog, Dog-Eared Passport.