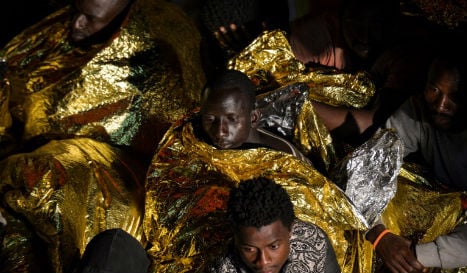 Migrants and refugees wait to be transferred from Malta's Topaz Responder ship after being rescued off the coast of Libya on November 5, 2016. Photo: Andreas Solano/AFP
According to the agency, the overseas route to Italy was the exception in a year which saw large falls in overall refugee numbers.
The number of migrants arriving in Europe by the two main sea routes in 2016 plunged by almost two-thirds to 364,000 compared with the previous year, it said.
Frontex pointed to an EU border deal with Turkey which came into effect in March as having paved the way to a massive decline in the arrival of Syrian refugees and other migrants in Greece.
Preliminary estimates show that in 2016 “the number of migrants detected on Greece's islands in the eastern Aegean and its mainland dropped by 79 percent to 182,500,” Frontex said.
Italy's 181,000 new arrivals in contrasted represented a 20% increase on the number seen in 2015.
The influx of more than one million asylum seekers — mostly from war-torn Syria — into the European Union in 2015 triggered the worst refugee and migrant crisis on the continent since World War II.