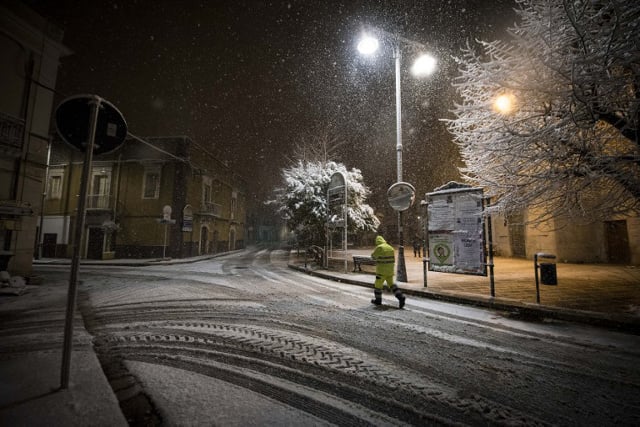 One, a pensioner from the northern city of Monza, was found dead from hypothermia on Sunday after leaving his home on Saturday.

The 81-year-old reportedly had Alzheimer's and went outside wearing only a jumper and slippers, and without informing anyone.

Six homeless people were also found dead over the weekend, with initial investigations suggesting they died from frostbite and exposure.

Some of Rome's Metro stations were opened to accommodate rough sleepers, while the Vatican announced that it would also offer cars as accommodation, and shelters and dormitories were kept open all day and night.

Winter sleeping bags, resistant to temperatures of up to -20C, were handed out to those who did not wish to move.

Pope Francis appealed to Catholics to pray for the homeless, who “suffer from the cold – and often from indifference” after his Sunday service.

Recently elected prime minister Paolo Gentiloni visited a Rome canteen serving meals to the homeless, and thanked the volunteers for their help.

The president of Italy's General Medical Society, Claudio Cricello, appealed to the country's elderly to stay at home unless absolutely necessary.

“We are used to giving out warnings during summer heatwaves, but the cold is an even greater danger and causes more injuries, particularly among the elderly,” he said on Sunday.

Italy's transport agency, Anas, also called on motorists to avoid travelling in Apulia and the centre-south.Consumer organization Coldiretti has warned that the cold weather could cost the central-southern region “millions of euros” in loss of livestock and crops. The organization said that numerous farm animals had died during the cold snap, while others were at risk due to a lack of water, isolation and exposure.