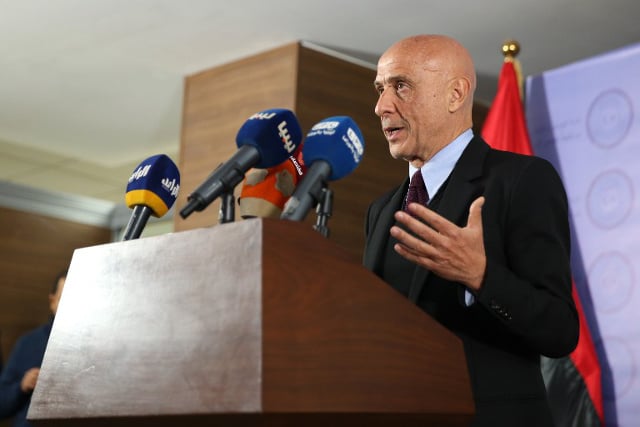 Interior Minister Marco Minniti speaks at the reopening of the embassy. Photo: STR/AFP

Speaking at a news conference in Tripoli, Minniti said the Italian ambassador would present his credentials on Tuesday before taking up his duties in the embassy in the Libyan capital.

Diplomatic missions in Libya have been targeted in recent years, including in 2012 when an attack on the US consulate in the eastern city of Benghazi killed ambassador Chris Stevens and three other American staff.

The embassy of Italy, a former colonial power in Libya, was one of the last western missions to close in February 2015 after a coalition of militias seized the capital Tripoli.

In a statement, Italy's foreign ministry said the reopening of the embassy showed “confidence in the process of stabilizing the country”.

Minniti said he held talks with Libyan officials on cooperation in the fight against illegal immigration and terrorism.

In recent years Italy has been on the front line of migrants arriving across the Mediterranean and has been pushing for agreements with governments in North Africa to facilitate returns.

Libya's Foreign Minister Mohamad Taher Siala said he had agreed with Minniti to launch joint initiatives to combat illegal immigration, as well as the smuggling of oil from his country.

“We have agreed to build new relations of cooperation on the basis of the friendship treaty signed in 2008,” said Siala.

It provides for cooperation from Libya in the fight against illegal immigration in return for compensation from Italy for its colonization of Libya, which lasted more than three decades until 1942.