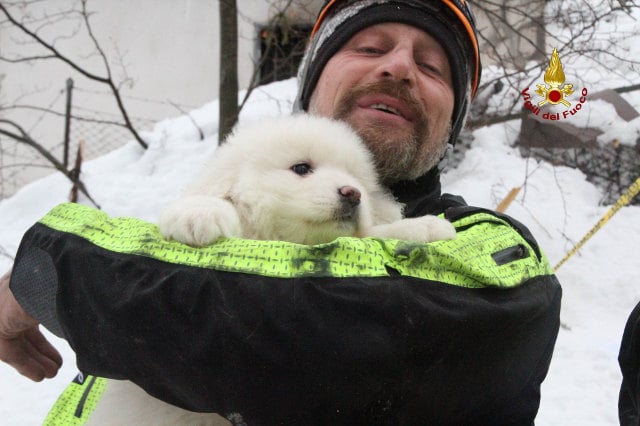 A firefighter embraces one of the rescued pups. Photo: Vigili del Fuoco

The three Maremma sheepdog pups had been born in December to the hotel's resident dogs, Lupo and Nuvola (Wolf and Croud) – who had escaped the quake and found shelter in the nearby village of Farindola.

The video below captures the joyful moment the dogs were brought to safety.

The puppies' survival was “an important sign of life, which gives us hope”, one firefighter said on Monday afternoon. The puppies have been checked over by vets, and are doing well, firefighters reported. The discovery brought a smile to the faces of rescuers, who have been battling through extremely tough conditions to find survivors. The pictures show the rescue teams stroking and cuddling the triplets. The three puppies, born on December 4th at the ill-fated hotel, were as popular with guests as their parents Lupo and Nuvola. The puppies are Maremma sheepdogs, indigenous to central Italy and particularly the Abruzzo region. After their rescue and medical checks, the puppies were reunited with their parents in Farindola, where one of the hotel employees had taken them in. Italian TV actress Barbara d'Urso, who described the hotel as her “refuge” and said she was praying for its guests and staff after news of the avalanche broke, had shared several photos of the puppies playing at the hotel before the disaster.