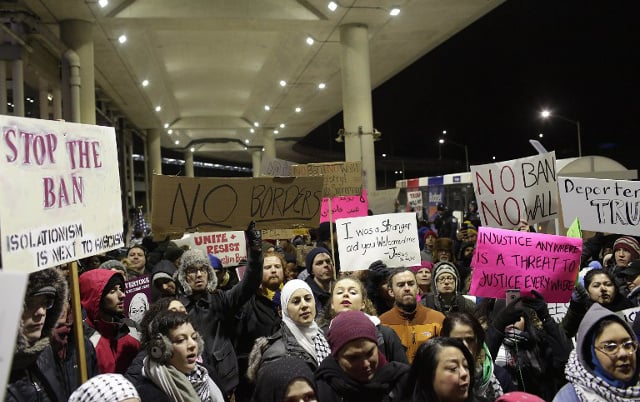 US President Trump signed an executive order last Friday, banning people from Iran, Iraq, Libya, Somalia, Syria, Sudan and Yemen from entering the country for 90 days regardless of their US visa status or permanent residency (though the Trump administration has subsequently back-pedaled and said it will not apply its ruling to those with American green cards).

The move has inspired protest across America, with thousands of demonstrators protesting outside the airports where dozens were detained, and human rights lawyers working pro-bono to assist the unlawfully detained.

Italian prime minister Paolo Gentiloni on Monday morning said: “Italy is close to the Muslim community”, expressing his condolences with the victims of an attack on a Canadian mosque.

Speaking during a meeting with European Parliament president Antonio Tajani, Gentiloni stopped short of mentioning Trump by name, but said: “I want to confirm [the Italian government's] attitude of closeness, of solidarity with the overwhelming majority of people of the Islamic faith who live in our country and who reject terrorism”.

Shortly after the ban was announced, Gentiloni had tweeted a statement seen as a condemnation of Trump's travel ban, saying: “Italy is anchored to its values. Open society, plural identity, no discrimination. These are the pillars of Europe.”

Interior Minister Marco Minitti warned against the conflation of immigration and terrorism, labelling it “wrong and unacceptable” as well as pointing out that treating immigrants as a security risk is counter-productive. “This leads to social exclusion and dissatisfaction, creating a breeding ground for radicalization,” said Minitti.

He also outlined the government's plan to ease the strain on migrant reception centres and improve integration of refugees and immigrants from different cultures. As well as putting in place new legislation and resources to speed up the time it takes to process asylum applications, he said the government was working with imams to set up official mosques and work towards 'an Italian Islam', with sermons in Italian.

However, Laura Boldrini, the Speaker of the House, called for stronger condemnation of Trump's ban, which she said was an “unmistakable and alarming sign” that the president was targeting people based on their religion and ethnicities.

“What the new president Trump is deciding for the United States affects us all because the executive orders, in addition to undermining the basis of international legal principals, lead to general chaos and a heightened risk of dangerous retaliation,” Boldrini added, urging the EU and all member states to speak out “with a strong and determined voice”.

The leader of Italy's far-right Northern League, Matteo Salvini, has praised the ban, retweeting a statement by Trump which referred to “what is happening in Europe” as “a horrible mess”, and referring to mass migration to Italy as an “invasion”.

“I can't wait to be able to apply the 'Trump method', he wrote, sharing a link to an online article about a drugs raid at a migrant reception centre. In a later tweet, he said Trump was “doing what he promised” and said that protesters were failing to “accept democracy”.

Several of Salvini's followers criticized him for writing in English.

What @POTUS is doing on the other side of the ocean, I'd like it done in Italy. An invasion is underway, it needs to be blocked. #Trump