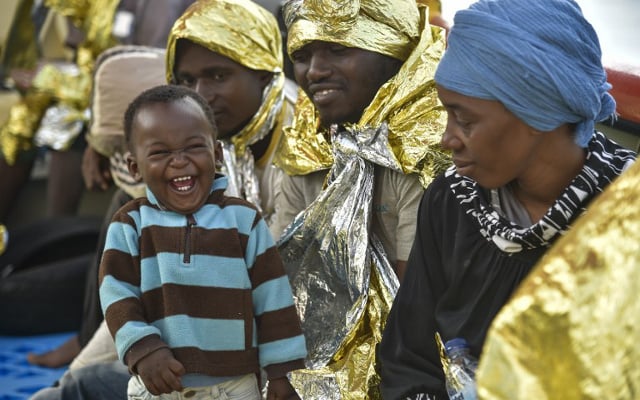 Migrants and refugees aboard one of the rescue ships. File photo: Andreas Solaro/AFP

On the eve of the Malta meeting, Italian Prime Minister Paolo Gentiloni and his Libyan counterpart signed a deal in Rome on tackling people smugglers in the North African country.

Italy pledged money, coastguard training and equipment to assist the UN-backed government and urged EU leaders to do the same when they meet in Valletta to address the worst migrant crisis since World War II.

Closing the smuggling route from Libya to Europe is “within our reach”, EU chief Donald Tusk said Thursday.

But Doctors Without Borders retorted that “declaring war on people smugglers does nothing to end the wars, poverty and lack of alternatives that fuel their trade”.

Italy's coast guard said around 450 people were pulled to safety on Thursday in five separate operations, while more than 1,300 others had been rescued the prior day from 13 makeshift boats.

Thursday's migrants were saved by the Aquarius, a humanitarian ship chartered by SOS Mediterranee and Doctors Without Borders (MSF).

MSF said earlier Thursday that the first 100 migrants saved at dawn – including seven women and 41 unaccompanied minors – had warned them others were also adrift at sea.

Picked up off the Libyan coast, the migrants – travelling with only an old compass to help them navigate and no life jackets – said they had set off with other people.

“Those on board tell us there are other boats needing help so the crew is searching hard and fast,” MSF Sea said on Twitter.

On the Aquarius, the idea of blocking migrants in Libya where they are victims of abuse and torture seems utterly inhumane.

“The Libyans shoot us like dogs,” Boubacar, a 17-year-old Guinean, said according to a SOS Mediterranee spokesman.

Italy says some 4,480 people were rescued and brought to the country in January, while the UN says over 220 people died or were lost at sea. Last year saw record numbers of both rescues and deaths on the perilous oversea route.