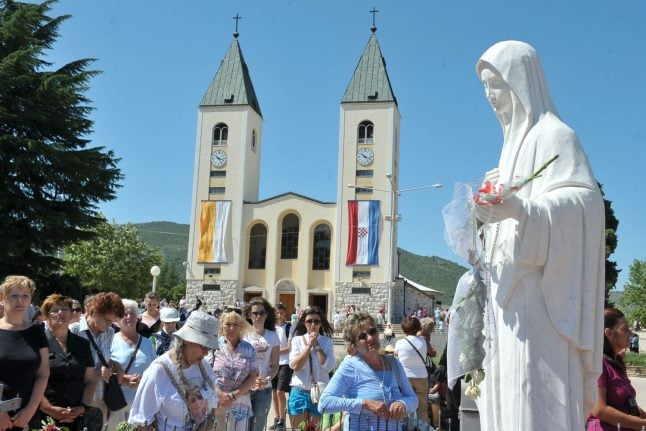 Pilgrims in Medjugorje in 2011. Photo: Elvis Barukcic/AFP
Mary, the mother of Jesus, is said to have appeared to six young people in the town of Medjugorje in 1981 and to continue visiting them to this day, but the apparitions have not been confirmed officially by the Vatican.
The new envoy, Archbishop Henryk Hoser, is being sent to “acquire a deeper knowledge of the pastoral situation” in Medjugorje, and “aboveall the needs of the faithful who go there on pilgrimage,” the Vatican said in a press statement.
But Hoser, whose mandate will last until summer, will not be tasked with verifying the authenticity of the apparitions, because that task falls to the Vatican's Congregation for the Doctrine of the Faith.
Under growing pressure from local clergy and pilgrims to term the Medjugorje events a continuation of Marian visions, several church investigations have been commissioned.
The last one, commissioned in 2010, concluded its report in January 2014, but nothing has been officially announced.
In November 2013, Pope Francis issued what could be interpreted as an invitation to caution about events in Medjugorje.
“The Virgin is not a post office chief who would send messages every day,” he said.
Apparitions of the Virgin Mary in the southern French city of Lourdes and the northern Portuguese city of Fatima are recognised as Marian visions.
Each year about one million people visit Medjugorje, some 25 kilometres (16 miles) southwest of Mostar and not far from the Croatian border.
Even Bosnia's 1990s war did not stop pilgrims from coming.
For locals, the religious tourism has been like manna from heaven, bringing prosperity in a poor Balkan country where Catholics make up 10 percent of its 3.8 million population.